It’s been a long time since I’ve uploaded a new recipe on the blog. I’ve had several messages from my regular readers to ask if I had shut my blog down or why I was neglecting my blog. I do apologize for my “disappearance” over the past two months. It’s not like I have not been cooking – actually I’ve been cooking even more than “normal” but I just haven’t had the time to take pictures and write up the recipes (this format of the blog is very time-consuming). I’ve been cooking more than usual because of two reasons – first, due to health concerns my husband and I’ve been trying to follow a low-carb diet (not very strictly but kind-of) and so we’ve cut back on our eating-out and second, my daughter has been told by her doctor to follow a gluten-free diet (issues with persistent acid reflux). This makes eating out even more difficult. So the result is that to accommodate the preferences of everyone at home, I’m cooking a lot more but it leaves me with even less time to blog.
Also, after talking about it for years, I’m finally getting down to working on my novel. I’ve joined a weekly writing class and now in a very disciplined way I’ve started putting in at least a couple of hours each day to my writing project. This makes me even more constrained for time. This is why my blog has suffered a little over the last few months. So there, this is the long-drawn explanation for why my blog has been on a bit of go-slow. However, I do want to reiterate that I am in no way giving up on the blog – I love it too much!
Last week, like most other American households, my household was abuzz with Thanksgiving related activities. We had sixteen people at our table and it took me weeks to prepare for this occasion. Although I’ve had much larger parties at my house, this was our first sit-down dinner for such a large group. We had to put two dining tables together, buy new dishes (all previous sets of dinnerware were a service for 8 or 12), borrow folding chairs, break my rule of no-table-cloth (I prefer to use placemats because I love bare wooden tables) and shop for raw materials for weeks. In the two weeks leading up to Thanksgiving I went to the following place: twice to Ikea, twice to Costco, three times to Trader Joe’s, three times to Whole Foods, once to the Indian grocery store, twice to the wine and liquor store and twice to Home Depot! Anyway, the good thing was that the Thanksgiving dinner went off really well and we all had a great time. Alas, my work was not finished – I still had to deal with tons of left-overs! So the next day I placed individual servings of turkey, mashed potatoes, stuffing, gravy and beans in disposable Tupperware boxes and froze them for my son (a senior in college) and for my daughter’s boy-friend (a graduate student). I used up the turkey bones to make soup for my dogs. And finally, yesterday I made soup from the left-over ham bone. I must confess that in the past I’ve always just thrown out the ham bone and now I realize what a fool I’ve been. This ham-bone soup was absolutely magnificent. The base broth was complex, hearty and delicious – perfect for a cold winter day! I looked up recipes for ham-bone soup at various websites and then improvised a little on my own. At the very end of the cooking process I added some cubed fresh pineapple and that is what took the soup to a whole different level of perfection. Ham and Pineapple are a classic combination but it is unusual to add pineapple to a savory soup. I added the fresh pineapple at the very end of the cooking process. Believe me, it was a delicious addition! 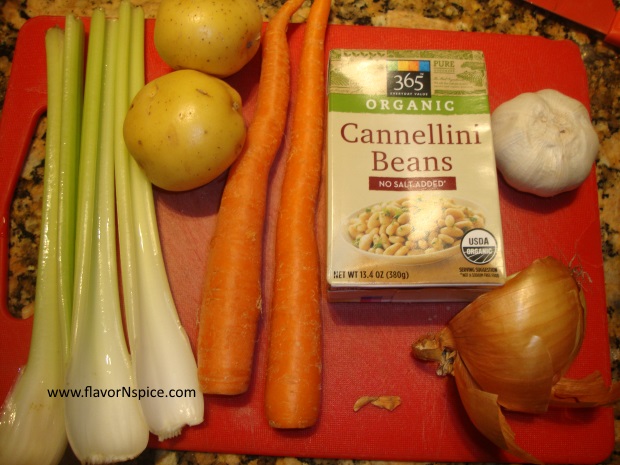 1. One large left-over ham bone (I had used a cooked spiralized ham that had been cooked with cloves and pineapple with a brown-sugar glaze).
2. ½ medium white onion
3. 2 carrots
4. 2-3 stalks of celery
5. 8-10 cups of water
6. One can of navy beans or Cannelini beans
7. Salt and pepper to taste (don’t add too much salt because ham already has a lot of salt in it)
8. One medium yellow potato
9. One large clove of garlic
10. Half a cup of diced cooked ham (left-over from the baked spiralized ham)
11. ½ cup of cut fresh pineapple
12. 2 tablespoons of extra virgin olive oil 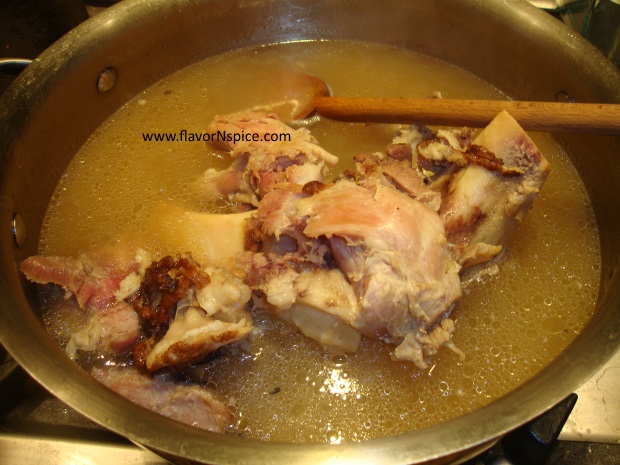 1. In a large saucepan place the ham bone and add water to it (so that the bone is covered) and start cooking the ham bone over low heat for about 80-90 minutes. If you think the water is evaporating too fast, add more water and continue cooking on low heat.
2. When the broth is cooled down, take out the ham bone and throw it away.
3. Cover the broth with a lid and place in a refrigerator overnight.
4. The next day take the broth out of the refrigerator and you’ll notice a thick layer of coagulated fat on top. With a spoon take off the fat layer and discard it. Set aside the broth, so you can add it to the soup later.
5. Peel an onion and finely dice it.
6. Also peel and dice the two carrots.
7. Chop the celery sticks. 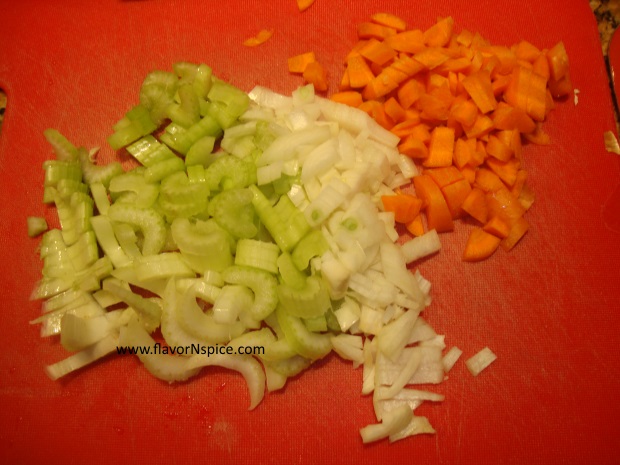 8. In a heavy bottom pan add the olive oil and heat over low heat. 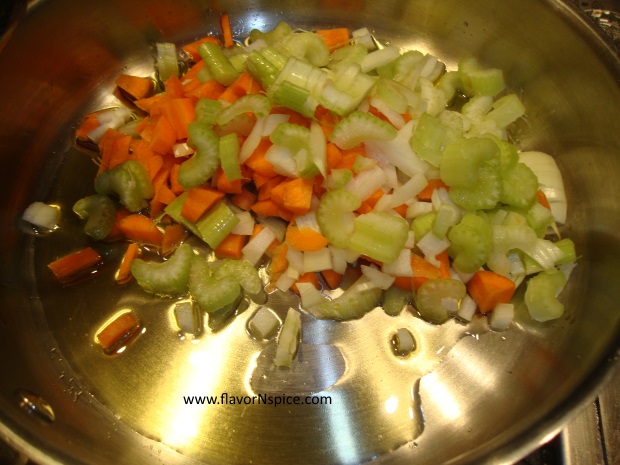 9. To the oil add the chopped onion, celery and carrots and stir. Cook on low heat for 8-10 minutes while stirring frequently.

10. While the vegetables are cooking, dice the potato in small cubes. 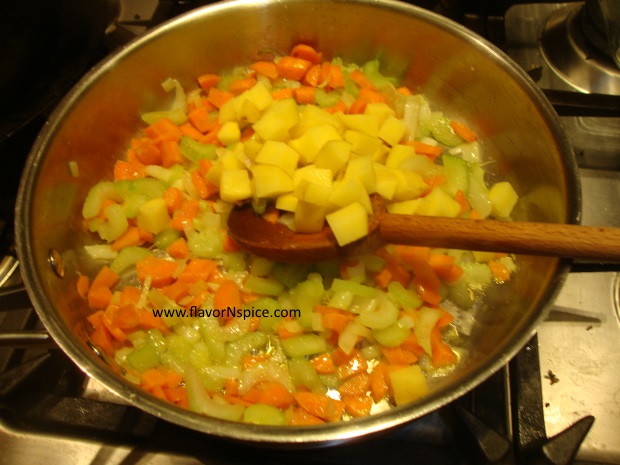 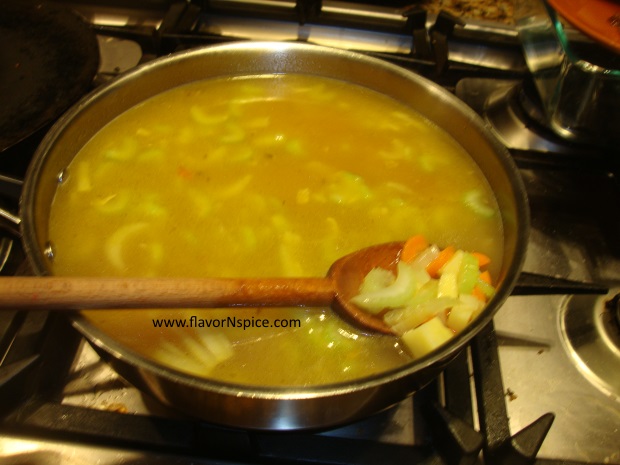 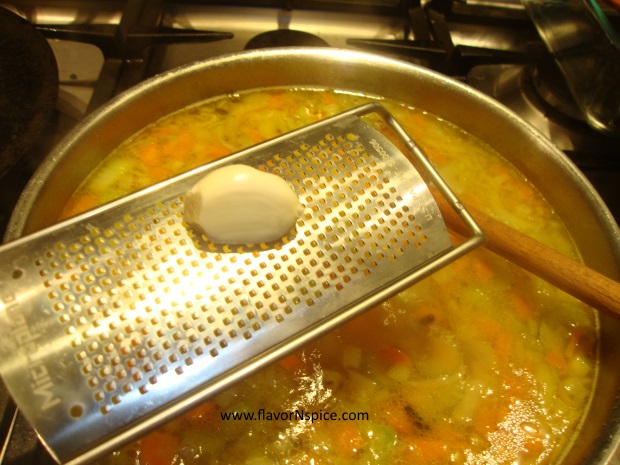 14. Peel and grate a clove of fresh garlic over the soup and stir. 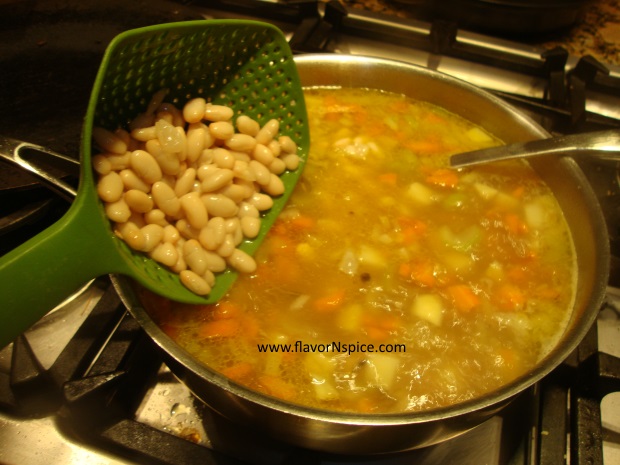 15. Open the can of beans and wash the beans under a stream of cold water. Add the beans to the soup. Cook for 4-5 minutes. 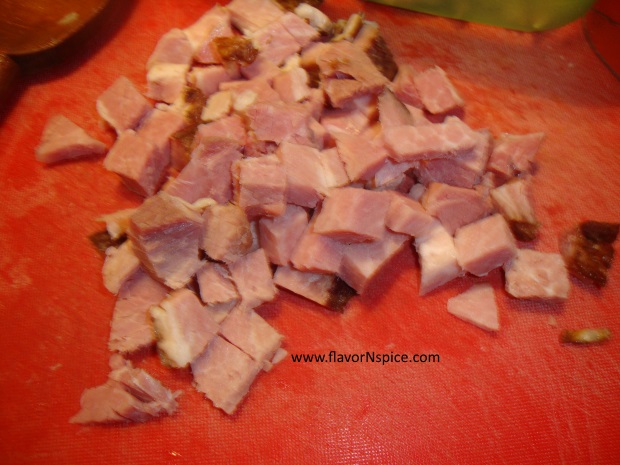 16. Chop the cooked ham into small pieces and add to the soup. Add the ham to the soup and cook for another 1-2 minutes. 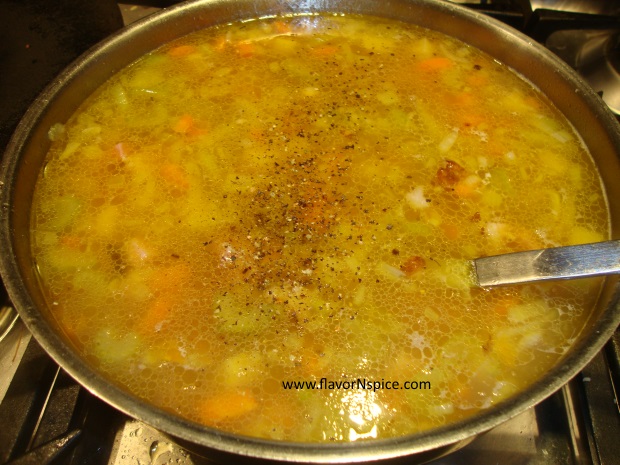 17. Now taste the soup for salt. Add a little salt (as per preference) and pepper and stir 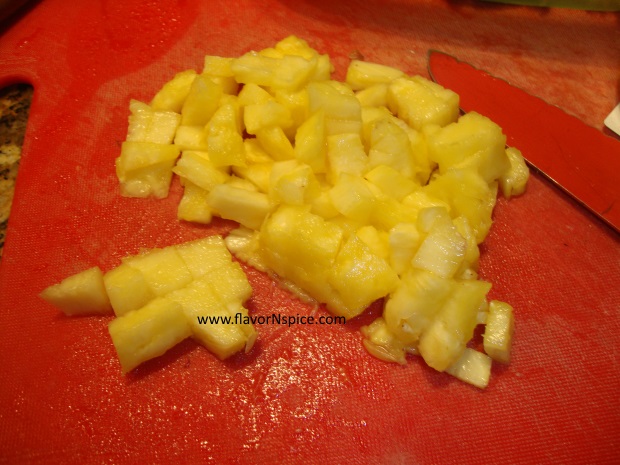 18. Chop up fresh pieces of pineapple and add to the soup. Turn the heat off. 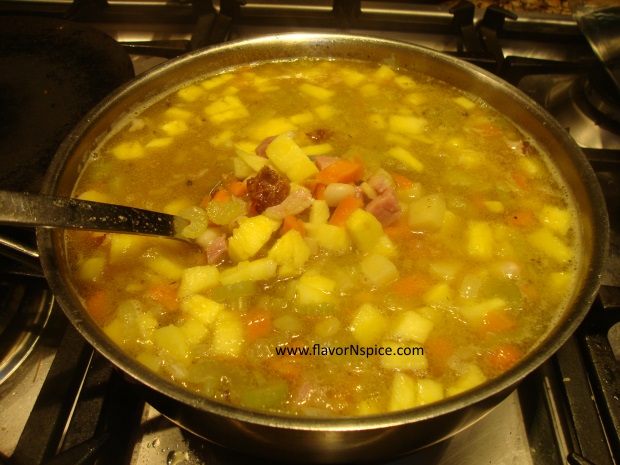 19. Serve the soup with a piece of chewy crusty bread while the soup is piping hot. 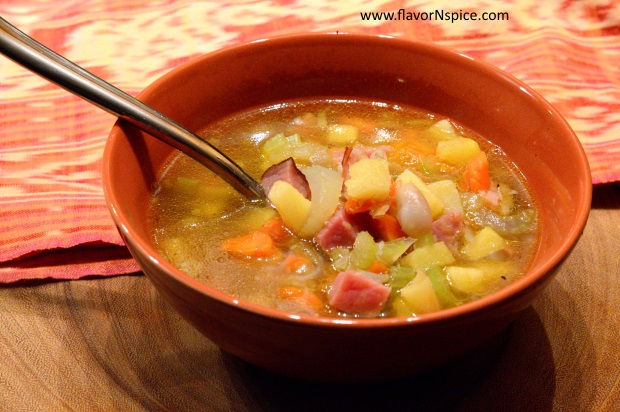