The end of summer is here and to make the most of the peach season, I bought four pounds of ripe peaches at the farmer’s market. They were absolutely delicious and other than eating them raw, I decided to cook them with some pork (since pork works wonders with fruity flavors). The first time I tried this recipe, I used a 1.5 lbs pork tenderloin and it turned out really good. Unfortunately, I didn’t take any pictures so I couldn’t upload the recipe on the blog. So today I tried the whole recipe again but this time I used a 2.5 lb piece of pork roast. However, both these cuts of meat are quite lean and tend to dry out (although the sauce in the recipe did compensate for it) maybe next time I’ll try it with best a pork shoulder because that is a fattier piece of meat. Either way, the peaches gave the meat really good flavor and juiciness and the recipe turned out to be a real hit in the family. Both my children said this was one of my best inventions. The next day they took the left-overs for lunch at work and they said it tasted equally great (if not better) the next day.
So the recipe looks quite elaborate but it is actually very simple. Since I use a slow-cooker, it was all a matter of just leaving it to be cooked slowly on its own. So once you assemble the ingredients, it is quite simple to make. I served it over creamy garlic polenta (that I mixed with a little cheddar cheese at the very end) and that served as a great canvas for the juicy meat. The polenta absorbed the juices and the combination was really good. 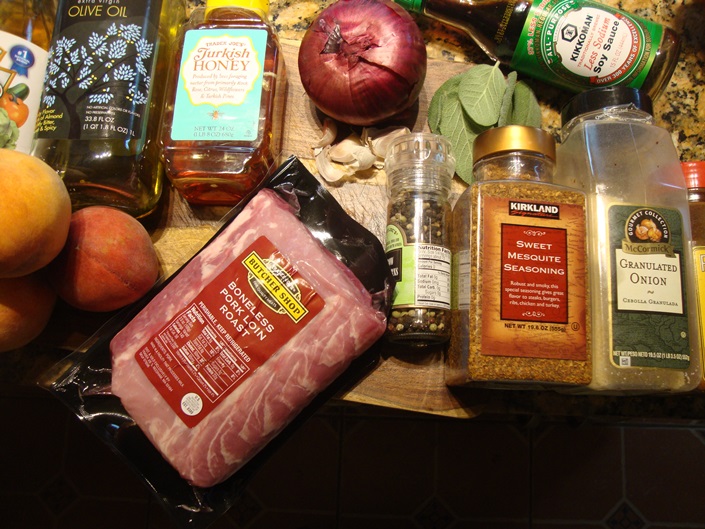 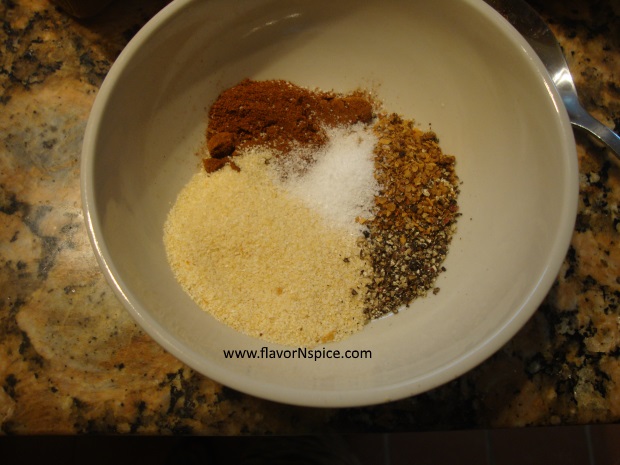 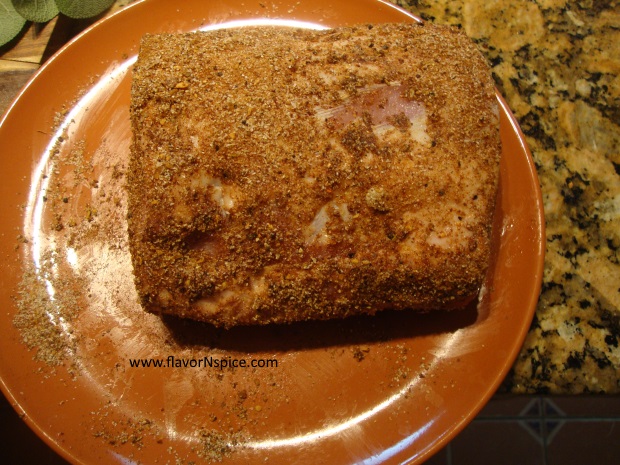 2. Rub this dry mixture over the piece of meat and set it aside.
3. In a large pan, add one tablespoon of olive oil and heat on low heat.
4. Peel and slice the garlic cloves and place the slices in the hot oil. 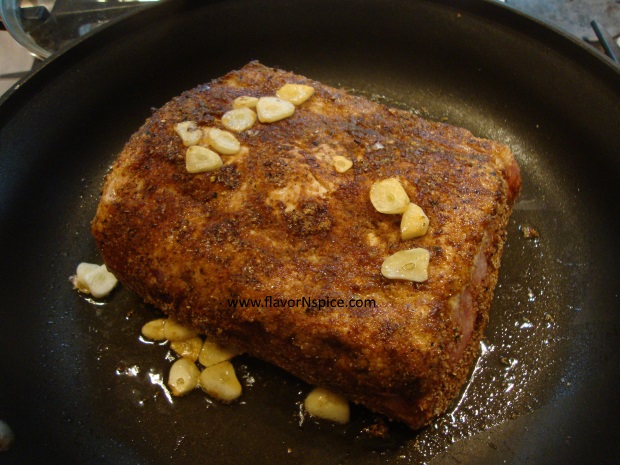 5. Sear the chunk of meat with the dry rub all over it in this hot oil pan (on all sides) – this should take only about 4-5 minutes.
6. In the meantime, add the following wet ingredients to the slow cooker: soy sauce, apple cider vinegar, brandy, ketchup, and honey.
7. Place the chunk of meat and all the contents collected at the base of the searing pan into the slow cooker. 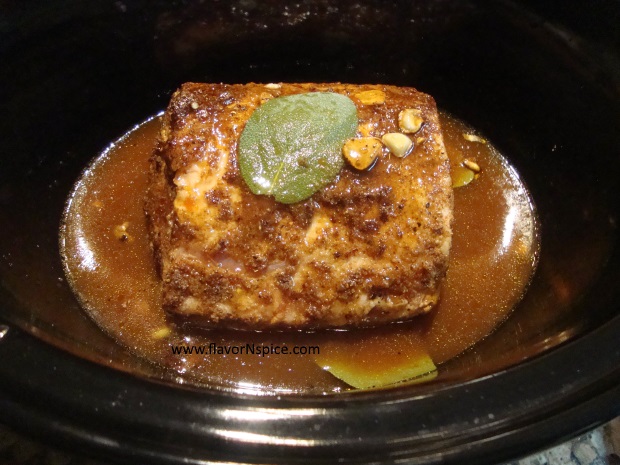 8. Now add the sage leaves to the pot.
9. Cook the meat on high heat in the slow cooker for 2 hours (or until it looks cooked). Occasionally baste the meat with the juices collected at the bottom. 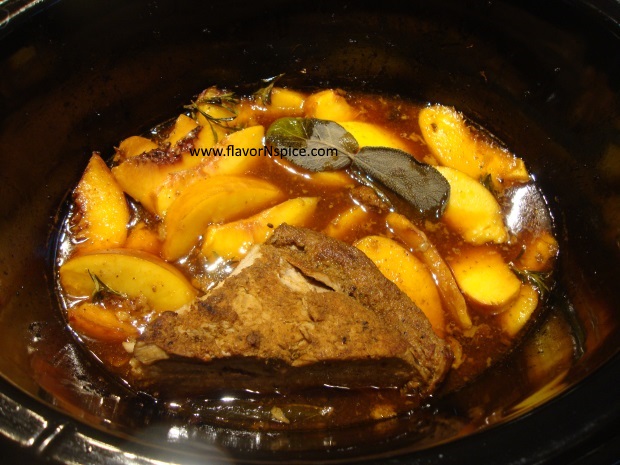 10. After the meat looks cooked, slice the peaches and place in the slow cooker for another 30 more minutes. The peaches will need to be taken out of the juice collected at the bottom, so don’t mix them all over the pot (it’s just easier to take them out when they are all on one side).
11. With a large spoon take the cooked peaches out and set them aside in a bowl.
12. Now peel and slice the large red onion. 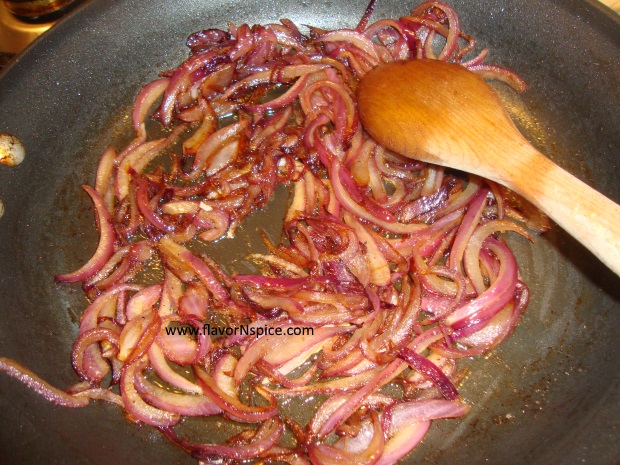 13. In a shallow skillet, add the butter and another tablespoon of olive oil and caramelize the sliced onion slowly. To speed the process up a little bit, you can add a little bit of salt and a teaspoon of brown sugar. Stir frequently.
14. While the onions are getting caramelized, take out the chunk of meat and with two forks, shred it. You can also use a knife to cut into thin slices.
15. When the onions look caramelized, add the sauce collected at the bottom of the slow cooker to the skillet and cook it down to a slightly thicker consistency. 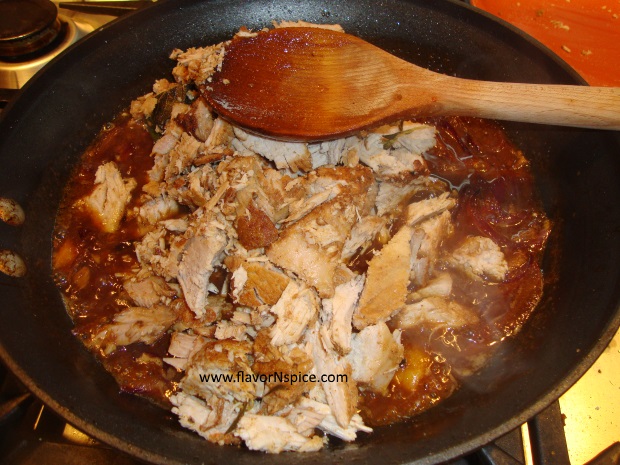 16. Add the shredded pork to the skillet and stir.
17. Serve this shredded pork over a bed of polenta and the stewed peaches that you had cooked in the slow cooker. Garnish with some fresh sage leaves. This is a very rustic looking dish, but believe me, it tastes delicious and can compete with any fancy meal you might have in a hoity-toity French bistro. 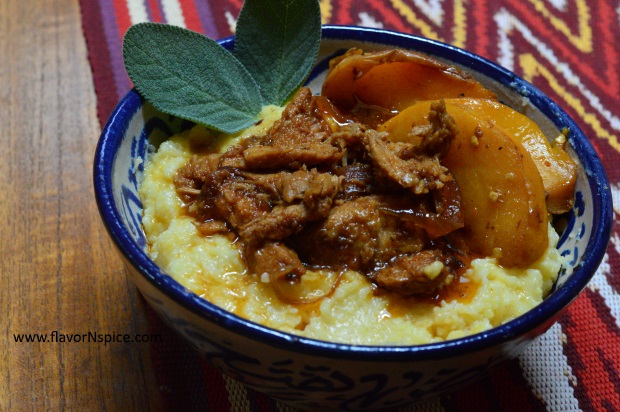