Every fall, supermarkets in the US start to get flooded with boxes of the sweet Italian currant bread called Panettone. My family loves to eat Panettone slices for breakfast – lightly toasted and then slathered with some good butter. So each year before the kids come home from college for the Thanksgiving break or Christmas break, I stock up on Panettone. Last year for Thanksgiving, I had even made a citrus flavored bread pudding out of Panettone for the dessert course of our feast. I had reinforced the orange flavor by adding orange zest, Grand Marnier (orange Liqueur) and even some orange marmalade. It was a great success and I had intended to re-make the whole thing and take pictures for my blog but then I forgot all about it. A whole year has gone by and the cold weather has come back and just two days ago I realize that I had not uploaded this recipe as yet. Today, I am hosting my book club at my place and I was struggling to come up with a dessert idea (since I basically suck at baking). I decided that with the Polar Vortex making its first arrival in my neck of the woods, a warm dessert would work well.
Also, if anyone wants a break from the traditional pies for their Thanksgiving dinner, here is the recipe: 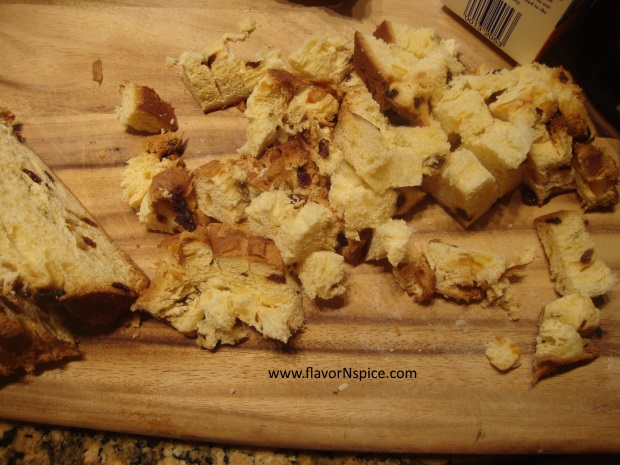 2. Cut the Panettone in small cubes – an inch or two big.
3. Place the cubed Panettone on a cookie sheet and lightly toast it by placing it in the oven for about 10 minutes. 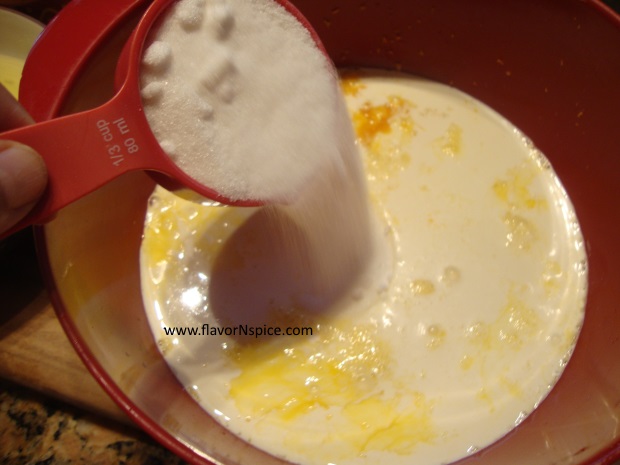 4. Combine the following ingredients in a large mixing bowl – 3 whole eggs, yolk of 6 eggs, heavy cream, milk, sugar, vanilla extract, Grand Marnier and orange zest. Mix everything together. You can use a whisk or a large fork to whisk everything together to make the base for the custard.

5. Take the toasted Panettone out of the oven and add to the liquid mixture in the mixing bowl and set it aside for 5 minutes so that the bread can absorb the liquid.
6. In the meantime, lightly butter the sides of the baking dish in which you want to make the pudding.

7. Also in a large Pyrex dish (which can fit the pudding baking dish in it) add about 2-3 glasses of hot water (not boiling hot…just hot water from your kitchen faucet will do). 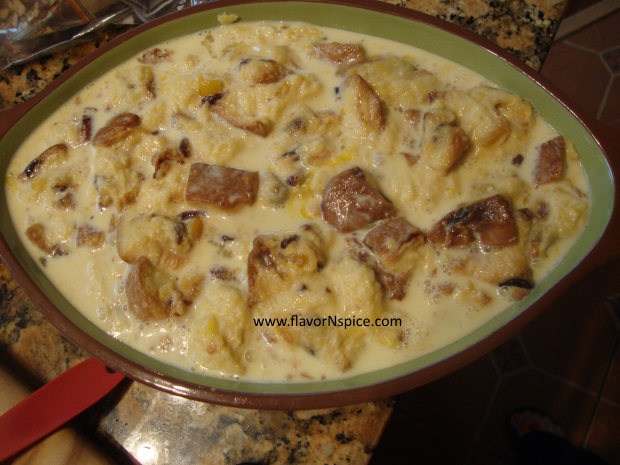 8. Pour the mixture from the mixing bowl into the buttered baking dish and then gently place the loaded dish into the Pyrex dish containing water. Basically you will need to bake the pudding in a water bath.
9. With a long piece of tin foil, cover the baking dish. Keep it tented so that it doesn’t touch the custard in the baking dish. And also cut a few holes in the foil so that steam gets released during the process of baking.
10. Bake the pudding for 40 minutes and then take it out of the oven and remove the foil. 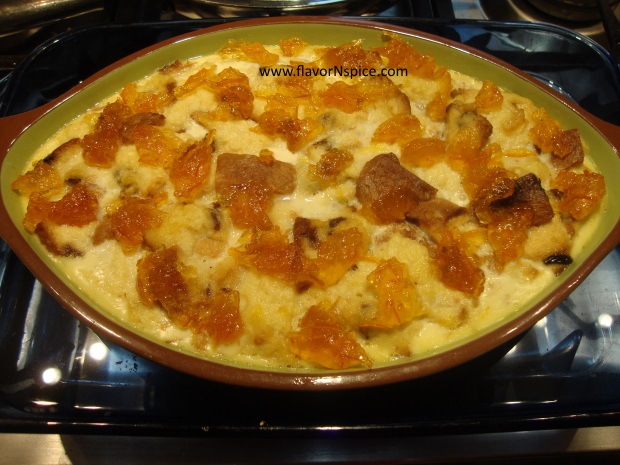 11. Using a spoon, add small dollops of orange marmalade over the surface of the pudding. 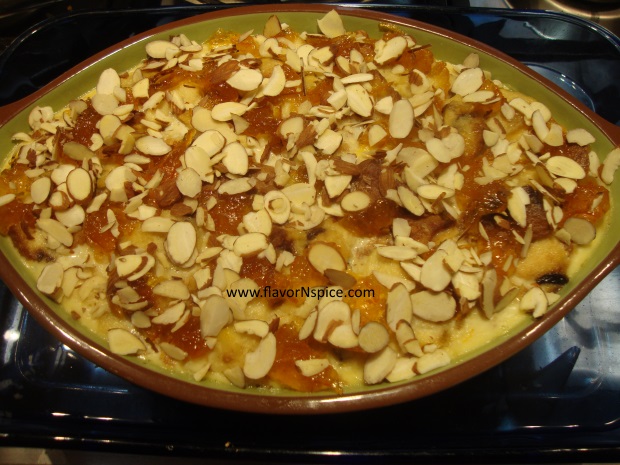 12. Then sprinkle the sliced almonds and make a layer of almonds on top of the orange marmalade.
13. Place the baking dish in the water bath again and then back in the oven for a 40 minutes but this time it should be uncovered.
14. Serve the pudding while it is still warm. I like to serve it with ice cream and this time I was lucky enough to find a really good Blood Orange Frozen Greek Yogurt. Given that the pudding is quite heavy, a light frozen yogurt will pair well with it. Enjoy! 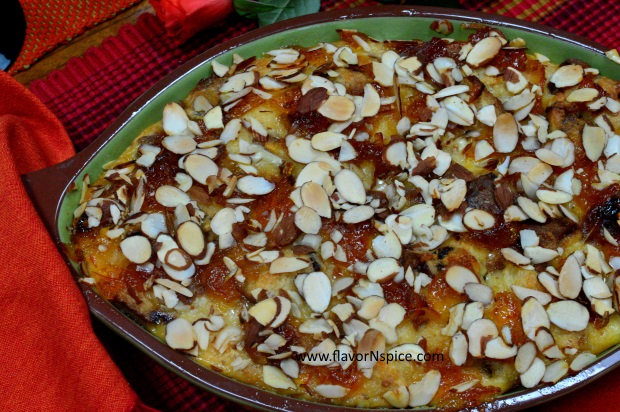