Readers who are regulars on my site might have noticed that I’ve been a bit absent lately. It’s not that I haven’t been cooking, it’s just that I haven’t been well (down with bad asthma and borderline pneumonia) and so I just haven’t had the energy or will to take pictures, edit them, write the recipes down and then upload them. The whole process takes at least a couple of hours for each recipe (sometimes more) and since I am not well, I just keep procrastinating the whole thing. Also my kids are home from college and since these family-times are getting rarer and rarer, when they are here, I just want to soak it all in. The result is that the blog suffers even more. Surprisingly, despite my ill health I have been making elaborate meals for the kids – they get so sick of terrible college-dorm food that when they come home, each of them has a whole list of requests. They tell me that during the year when they are at college, my constant pictures on facebook and the website are a real teaser and so I have to pay a price when they here.
Anyway, over the past two-three days, my asthma got even worse and at times like this, I prefer to make a one-pot-dish. My usual solution for this is a wholesome flavorful soup that contains meat, vegetables and/or beans. Some weeks ago I had made a soup with a medley of Italian Sausage, beans and vegetables and even though I had not thought of putting the recipe down, I had uploaded a picture of the finished product on facebook and was taken aback by how many people asked for its recipe. So I promised quite a few people that I would make it sometime soon and upload the recipe. So this morning I set about to fulfilling that promise. It is an easy recipe in which I throw in a variety of beans (organic canned beans), whatever vegetables I have on hand (usually sweet peppers, some kind of squash and of course onions). The last time I had added some green and Kalamata olives and loved the flavor they added to the soup but this time I forgot to add them until it was too late (if you like olives, I suggest you add about a cup of sliced olives to the soup). Despite, the lack of olives, the soup came out really well (my husband liked it even more because he’s not a very big olive fan). It is a thick hearty soup and a bowl of it is quite satisfying and filling. You can even freeze this soup and even after weeks of being in the freezer, it tastes great! Just serve the soup piping hot and add a bit of sour cream or Greek Yogurt at the very end and garnish with a bit of fresh herbs – its perfect! 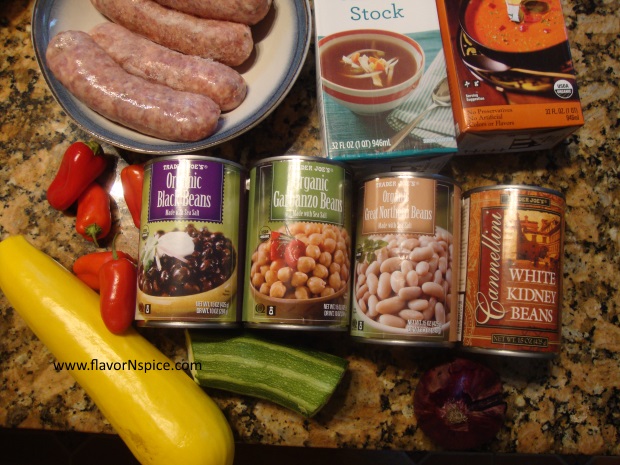 1. 1 lb of Italian Sausage
2. 5 15 oz cans of assorted beans (whatever kind you like, I used – chickpeas, Great Northern Beans, White Kidney Beans, Black Beans and Pinto Beans – all organic cans from Trader Joe’s)
3. 1 cup of Chicken Broth
4. 1 14.5 oz can of diced tomatoes (I used Trader Joe’s Fire Roasted Tomatoes)
5. One 32 oz box of already prepared Creamy Tomato Soup (I used Trader Joe’s Organic, Tomato and Roasted Red Pepper Soup)
6. 2 tablespoons of extra virgin olive oil
7. 1 large yellow squash
8. 1 zucchini
9. 6-7 sweet peppers or one red bell pepper
10. One medium onion (I used a red onion)
11. One teaspoon of red pepper flakes (or less if you don’t want it spicey)
12. 1.5 tablespoon of freshly ground coriander powder
13. Salt and pepper to taste (I added very little salt because the soup and the broth have salt in them already)
14. A handful of fresh herbs (I used fresh oregano, thyme, rosemary, tarragon)
15. A few tablespoons of 2% Greek Yogurt to add at the very end
16. 1/2 cup of pitted olives (optional – although I highly recommend them). 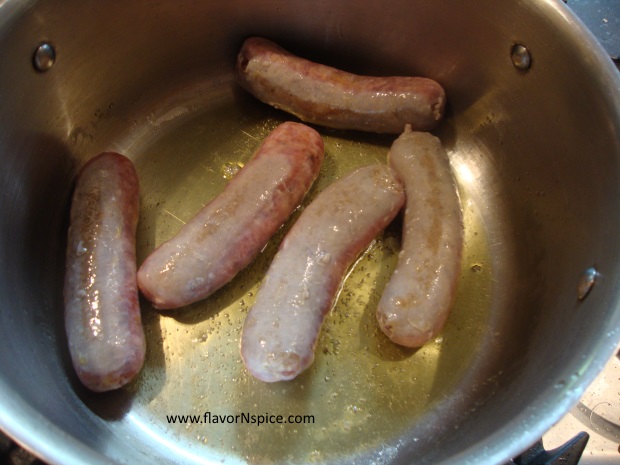 1. In a large heavy bottomed pan, add the olive oil and place the Italian sausage into the pot and over medium heat brown the sausages. 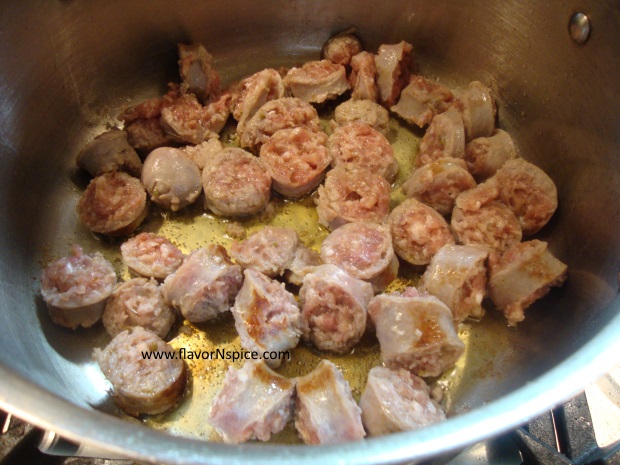 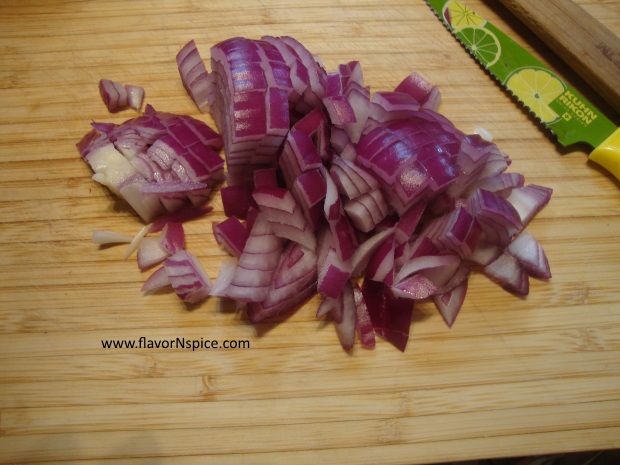 3. While the sausages are cooking, peel and diced the onion. 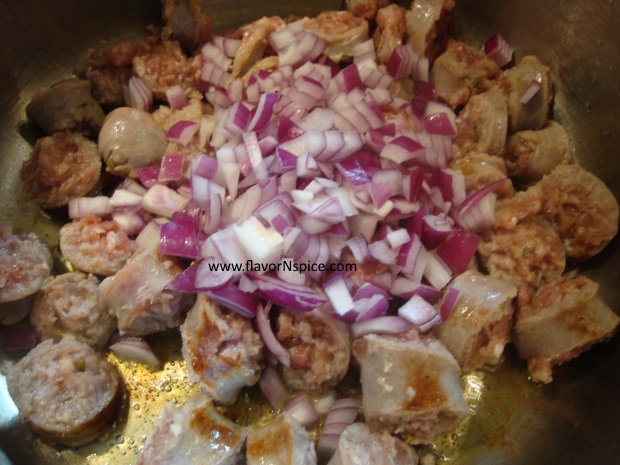 4. When the sausage meat looks fairly cooked, add the chopped onion to the pot and stir.
5. Cook the onions for 3-4 minutes while stirring frequently. 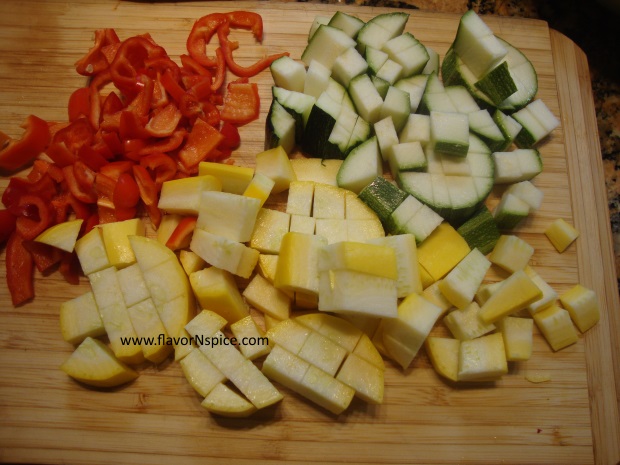 6. Wash and chop the vegetables – in bite sized pieces. 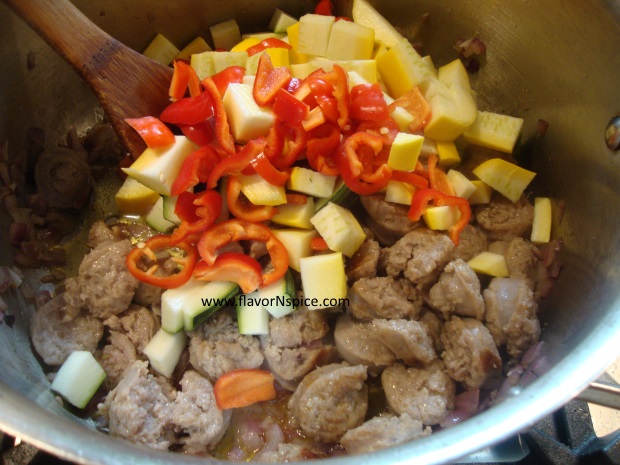 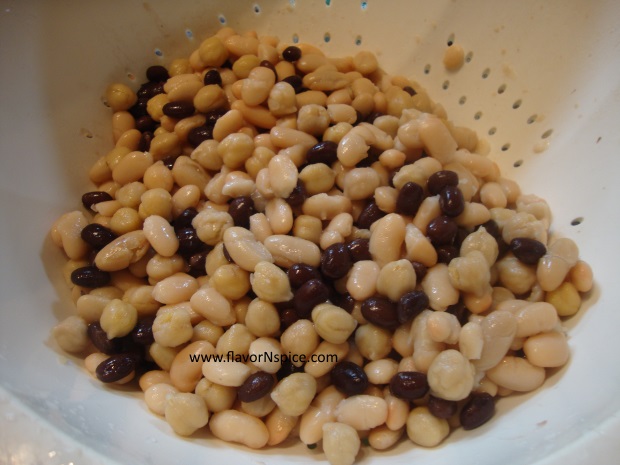 8. Open all the cans of beans and place them in a large colander. Wash the beans under cold water and wash the excess salt out of them. Let all the water drain out of the beans completely. 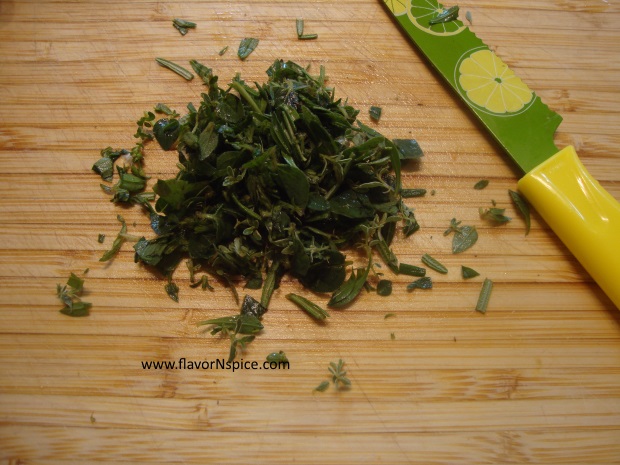 9. Wash the herbs and finely chop them. 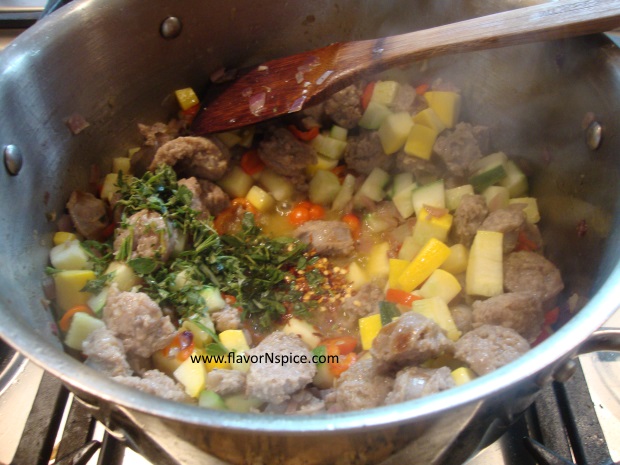 10. Add the herbs, red pepper flakes and salt and pepper to the pot and stir.
11. If you are going to add olives, do so at this stage (I forgot to do it this time – so there is no picture for it). 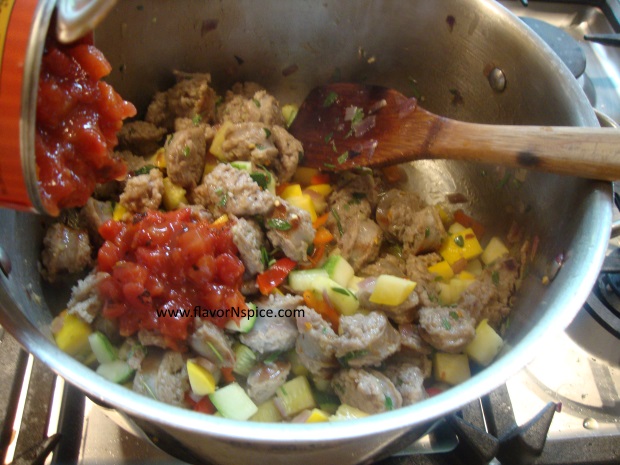 12. Add the can of diced tomatoes and stir everything. 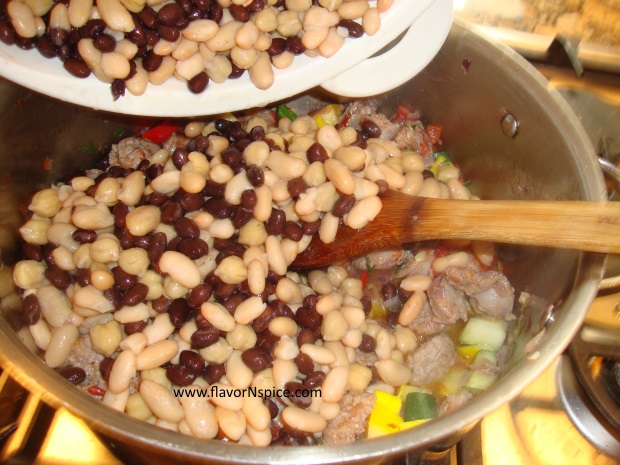 13. Add the beans to the pot and stir everything again. 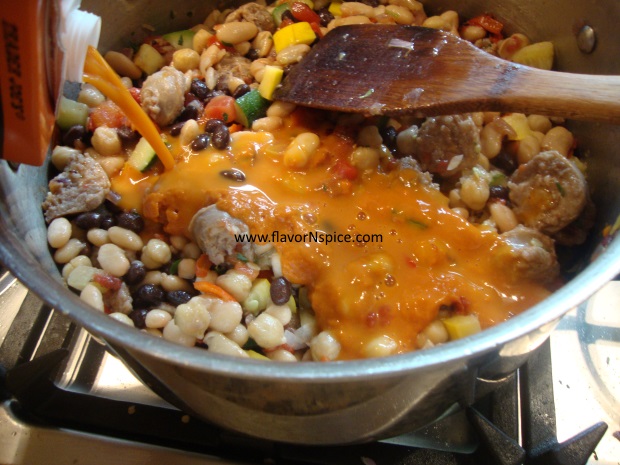 14. Now add the tomato soup (or tomato and red pepper soup) to the pot.

15. Also add the chicken broth and stir.
16. Cover the pot and bring the soup to a boil over low to medium heat.
17. Let the soup cook for another 7-10 minutes (while stirring every few minutes). 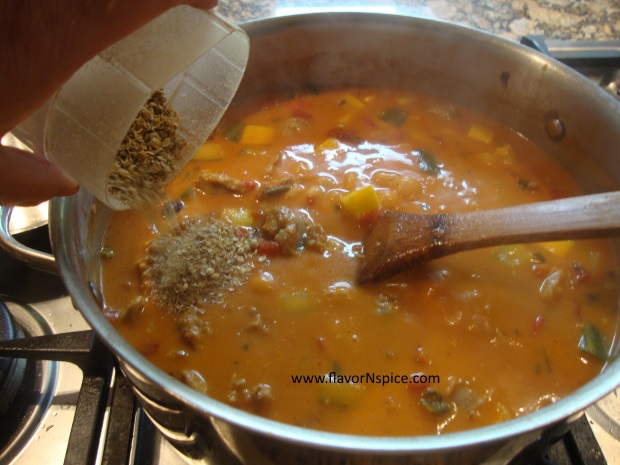 18. At the very end add the freshly ground coriander powder and stir.
19. Serve the soup while it is piping hot with a little bit of sour cream or 2% Greek yogurt on top. Garnish with some fresh herbs. 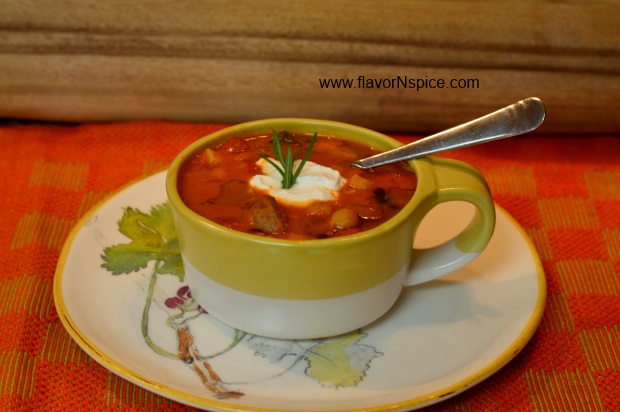