During our vacation in Istanbul earlier this month, we stayed at a lovely boutique hotel in the old part of the city. The hotel was a refurbished 500 year old Turkish Bath (Hamam) and was a stone’s throw away from historic spots like the Haghia Sophia (a 6th century Byzantine Cathedral) , the Topkapi Palace (a 15th century palace which was the primary residence of the Sultans of the Ottoman Empire) and the Blue Mosque (completed in 1616). Even, though this quaint boutique hotel is owned by two American sisters and it has all the amenities of a modern hotel without compromising on the traditions and aesthetics of Turkey. One of my favorite things at the hotel was the sumptuous Turkish breakfast that was served every morning. I loved this breakfast because I got to eat some of my favorite things – good bread, olives, feta cheese, fresh fruit, Turkish coffee and the best Spinach Borek. Over the course of my vacation, I tried this Turkish snack at various stalls and restaurants but I still think that the one served at the Empress Zoe Hotel was probably the best one.
So when I got back home, I tried out the recipe for a Spinach Borek. After a couple of tries, I came to the conclusion that taste-wise, even though mine came very close to the original version my texture was a little more crispy than the ones we ate in Turkey because I used a lot less oil in my recipe. Of course, the delicious olive oil that the Turkish use in their recipe makes their Borek out-of-this-world good, I am trying to cut out excessive fat in my diet (even healthy olive oil adds to the calories). I have kept the oil content quite low here. If , you’d like to make the texture exactly the way the original version has, please feel free to add more oil between the layers of Phyllo dough. 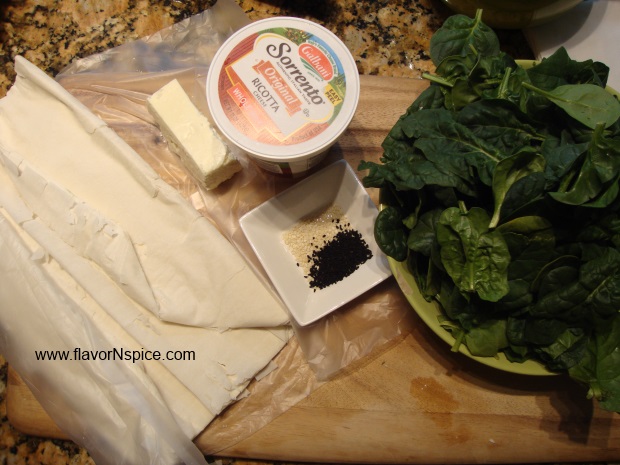 1. Heat the oven at 350 degrees Fahrenheit.
2. Thaw the frozen Phyllo dough sheets.
3. Break open the egg and whisk it.
4. Mix in the milk and the olive oil into the whisked egg and set this aside. 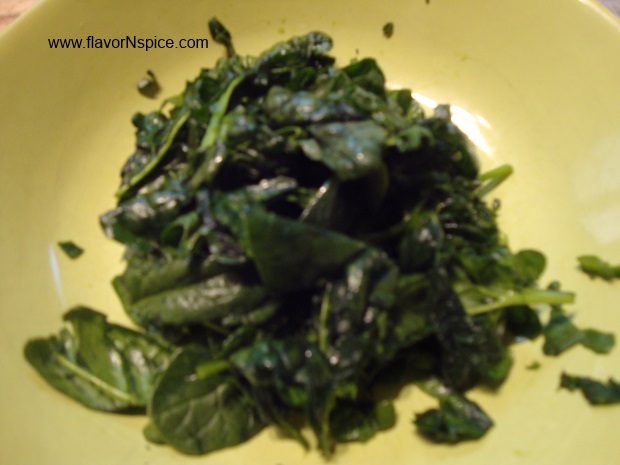 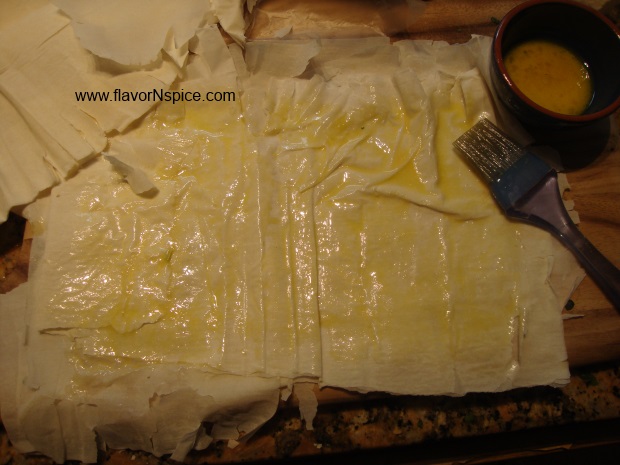 6. On a large cutting board lay out a layer or two of the Phyllo dough and using a basting brush, baste the layer with egg+milk+oil mixture. Then lay out another layer of dough and baste it similarly. Repeat this process with about 8-10 Phyllo dough layers. 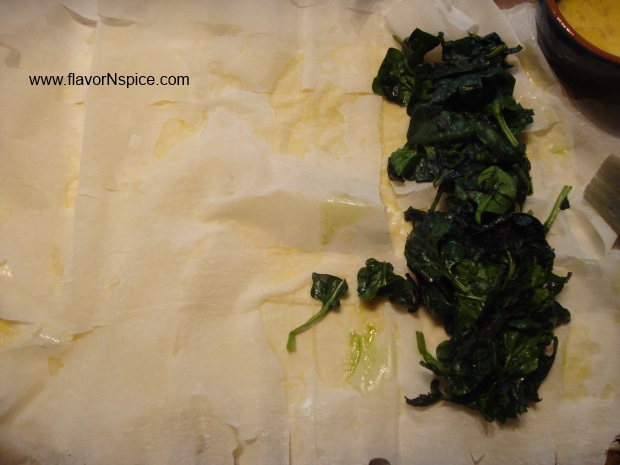 7. On one end of the layered Phyllo dough pile, spoon out some bruised spinach leaves along the width of the dough. 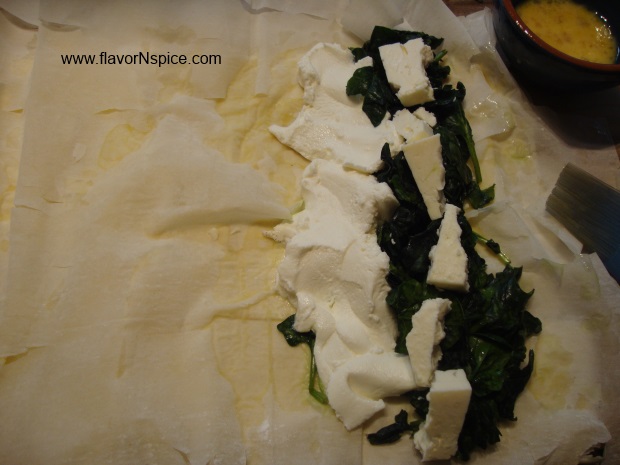 8. Add some ricotta cheese and some feta cheese along the spinach layer. 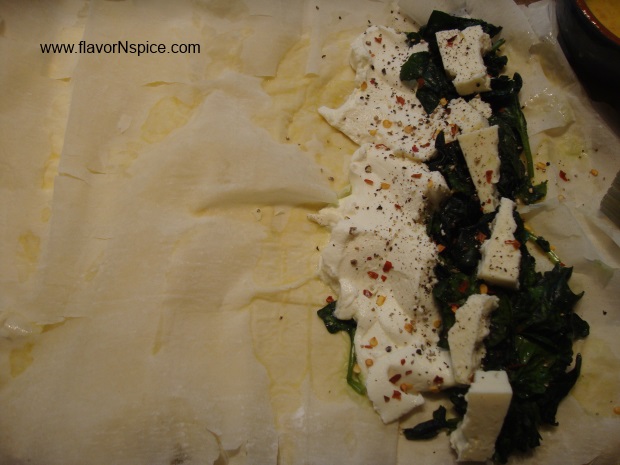 9. Sprinkle some ground pepper and some red pepper flakes on top of the cheese and spinach. 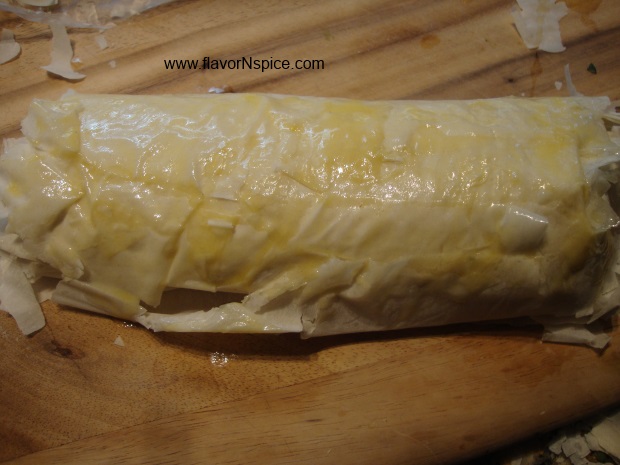 10. Fold in the edges of the Phyllo dough and slowly roll it into a neat rectangular package with the spinach and cheese packed in as stuffing (like you would roll a burrito). 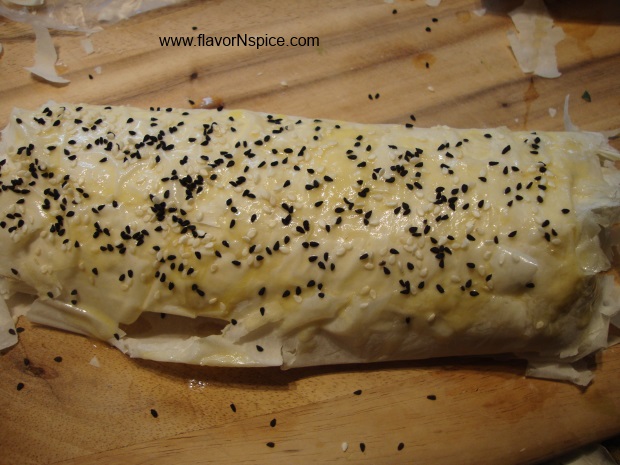 11. On the top layer of the rolled Borek, baste the top layer with the egg+milk+oil mixture and sprinkle some Nigella seeds and sesame seeds on the top.
12. Place the Borek on a cookie sheet and bake in the oven for 25-28 minutes. 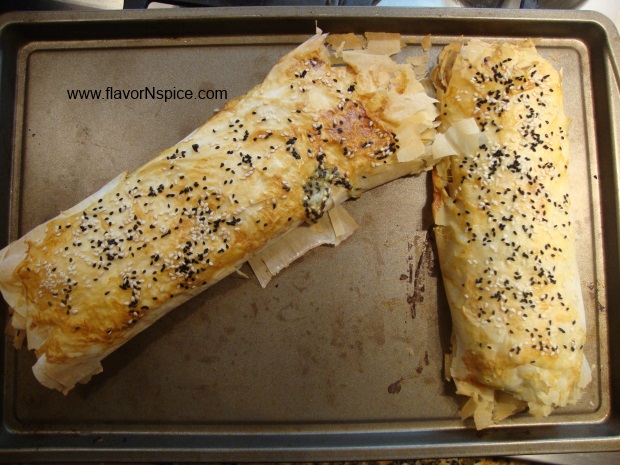 13. When the Borek looks lightly browned on top, take it out of the oven and let it cool for some time before slicing it. Serve while it is still hot or at room temperature. 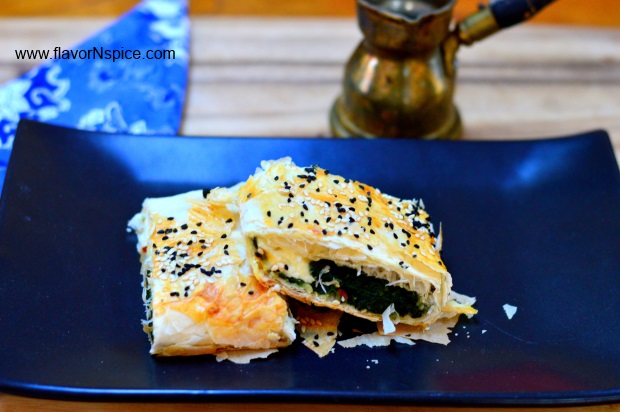