My son’s best friend attends college in Boston but since his parents live in Mexico he spends his holidays/vacation time with our family. So in a way I have gained another son. This summer he got a job working at a local farmer’s produce stall and each evening whatever is left at the stall, comes my way. This has been a real bonanza for me – I get the freshest of local produce for free. The only issue with this veggie lottery is that I never know what is coming my way each evening! Sometimes I get a lot of peaches and sometimes a lot of cucumbers and another day I get a ton of zucchini. I have been trying to keep pace with using up all this produce by either cooking the vegetables and freezing them (like the eggplants got roasted and placed in the freezer a couple of days back) or using up the fruit to make chutneys and jams and canning them for use later in the year.
So yesterday I got a few Pablano Peppers. I love peppers of any kind but I especially like Pablanos. So I charred the peppers to remove their outer skin and get them a smoky flavor and then I stuffed them with a mixture of sweet corn, fresh ricotta cheese, some Pepper-jack cheese and leeks. I served the peppers with a cream sauce at the bottom and it was not only a delicious dish, it also looks beautiful!

1. Wash and dry the peppers (with dry paper towels). 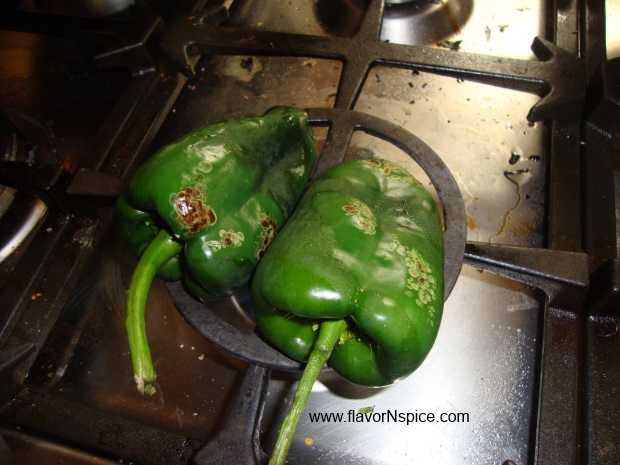 2. Place the peppers on an open flame to char the outer skin of the peppers. Rotate the peppers frequently so that all the sides get cooked evenly. 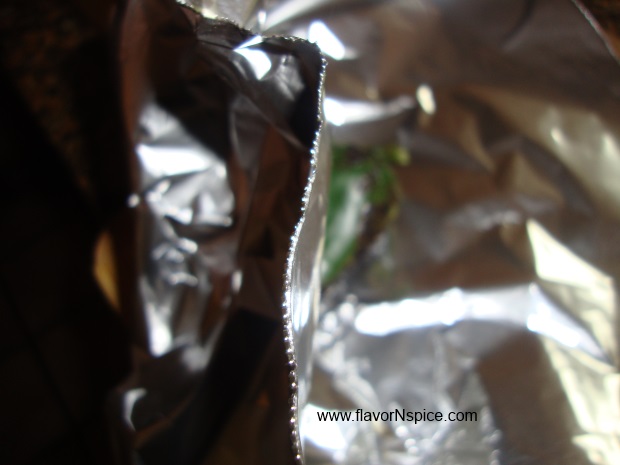 3. When the peppers are charred, place them in a tin foil and seal them in and let them sit for about 10-15 minutes. The heat from the charring process is retained and in the foil the peppers continue to sweat a little bit more. 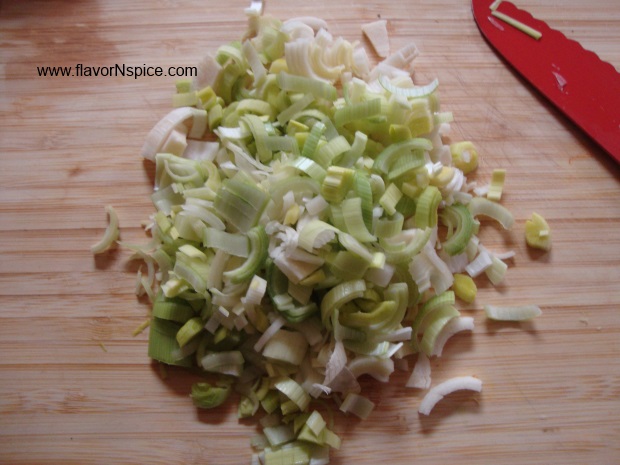 4. While the peppers are sweating, clean and finely chop the leek.
5. In a small skillet, heat about a tablespoon of oil and heat it on medium heat and pour the chopped leek into the pan and let them get cooked. 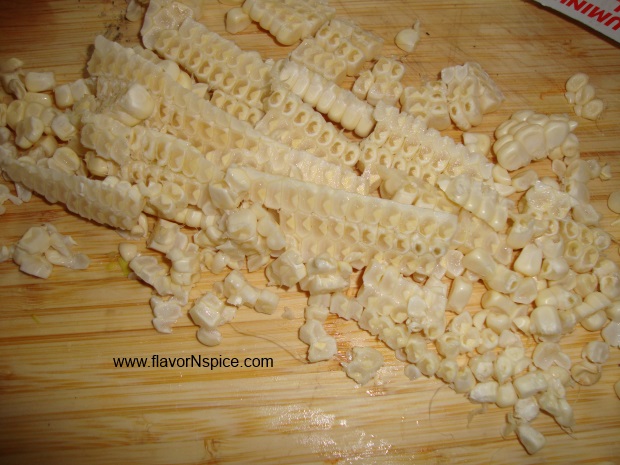 6. While the leeks are getting cooked, slice the corn kernels off the cob and pour the kernels in the pan with the leeks. Let them get cooked as well; stir frequently. 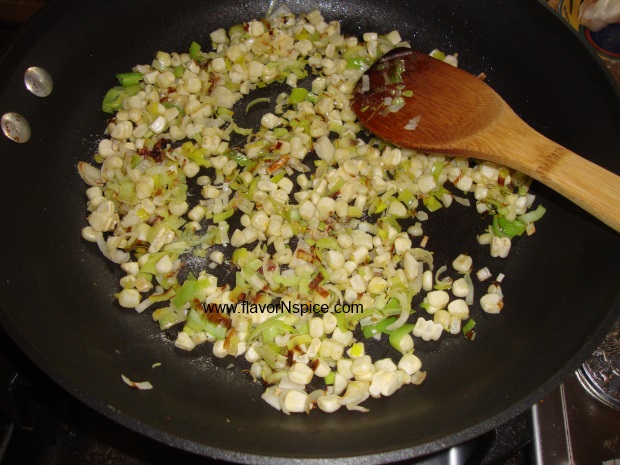 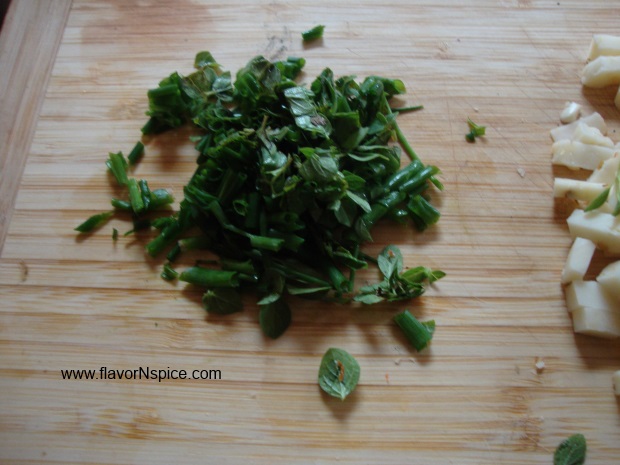 7. Wash and finely slice the fresh herbs (chives and oregano) and put them in the pan and stir and switch the heat off. 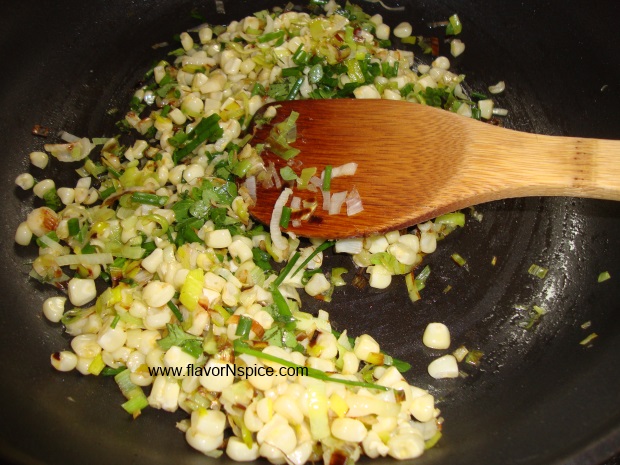 8. Dice the Pepper Jack cheese or grate it on a cheese grater. 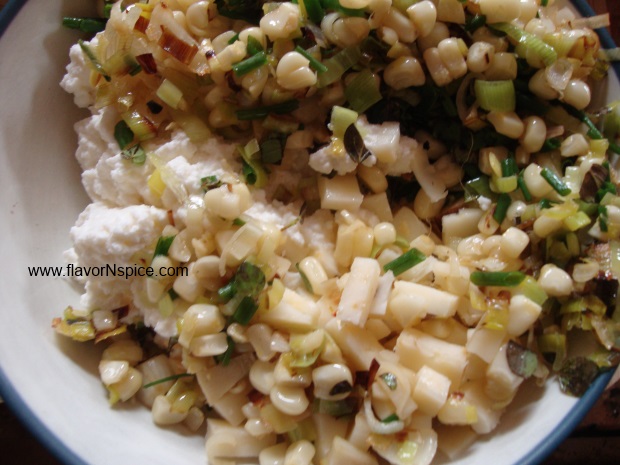 9. In a bowl, add the ricotta cheese, grated pepper jack cheese and the cooked corn and leeks mixture. Add salt and pepper to taste and mix everything together – this makes the stuffing for the peppers. 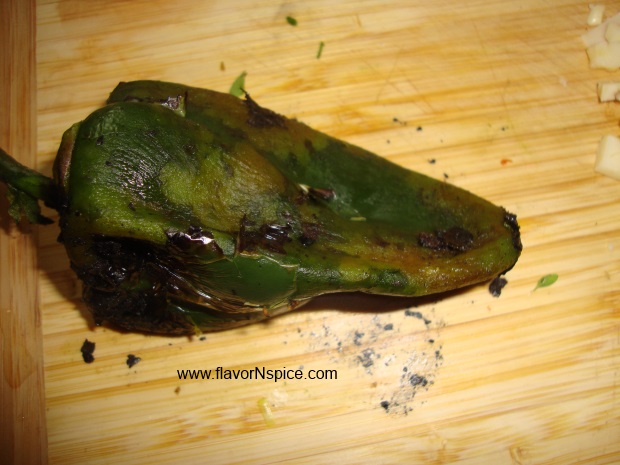 10. Open the foil and take the peppers out of it. Using your fingers, rub off the outer charred skin off the peppers.
11. Make a slit along the side of each pepper and using a sharp knife remove the seeds and the bulby-base to which the seeds are attached. Be careful not to make a very wide slit because otherwise the stuffing will get out of the peppers. Try to keep the shape of the peppers and also the stem should remain attached to the pepper. 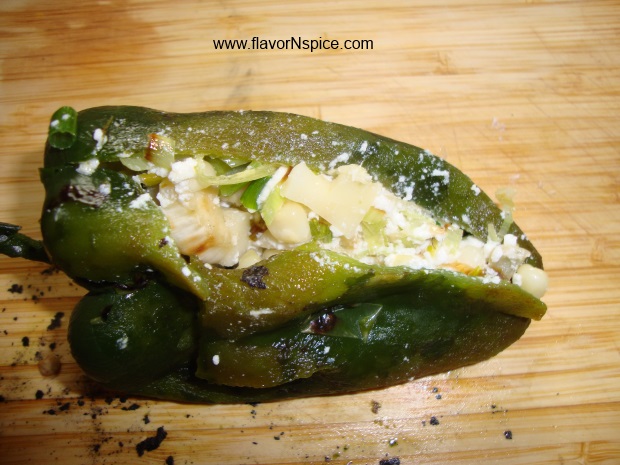 12. With a small spoon, fill in the stuffing in each pepper. Do not over-fill the peppers. Retain a little bit of the filling for making the sauce later. 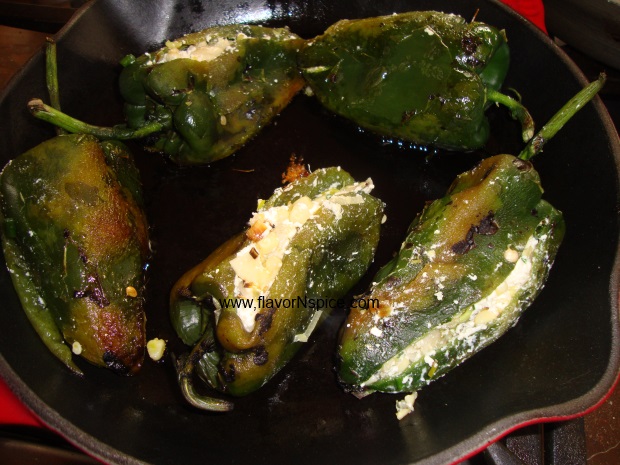 13. In a medium sized iron skillet or nonstick pan, add a little bit of olive oil and heat it on medium heat. Gently place the stuffed peppers into the pan and cook them on low heat for about 8-10 minutes. Half way through flip them on the other side so that each side gets cooked and the cheese inside starts to melt. 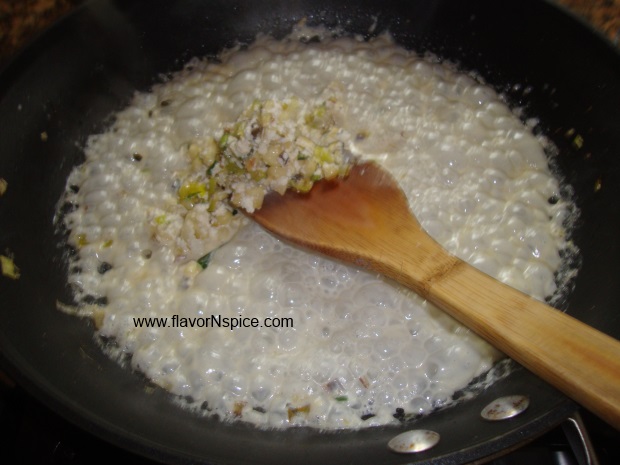 14. To make the sauce, bring the heavy whipping cream to boil in a pan and then add the remaining amount of stuffing to it. Stir frequently and cook for 2-3 minutes. Check for salt and add some more if needed.
15. Serve the peppers while they are still hot in a pool of the creamy sauce under them. Garnish with a little bit of fresh oregano. Enjoy!!! 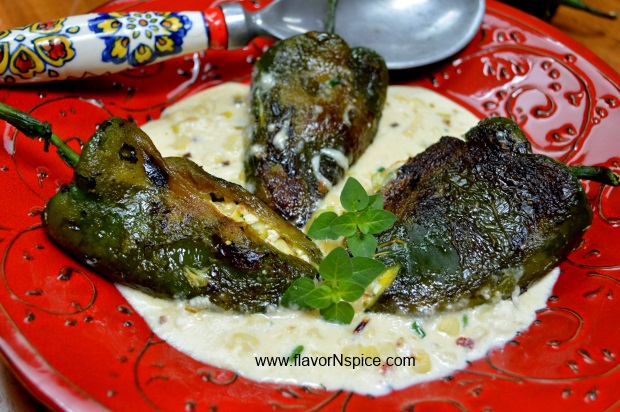