A few years ago I spent a whole month in Nice, France and fell in love with the city, the weather and most importantly the food! I know most hoity-toity French think of Nice as dirty and low class and prefer the surrounding towns on the Mediterranean Coast in southern France such as Antibes, Cannes or Ville-franche sur Mer. These towns are clearly more posh and their residents are rich and affluent people, often even celebrities. Whereas Nice has a huge immigrant population (from various parts of Eastern Europe, Africa or the Arab world) and that is probably why I liked it so much. I liked its diversity of cultures, peoples and cuisines. I liked the earthiness of Nice and I liked the fact that when I walked the streets the people were friendly and would stop and talk to me. I liked the absence of the snobbery that typifies Paris or Bordeaux or Cannes! Also, unlike the rest of France, Nice had a very distinctly Italian flavor to it (it used to be Italian territory until the mid-19th century when the Italian king sold it to Napoleon III) and its cuisine reflects that. In old town Nice, it is commonplace to find stalls selling woodoven-baked pizza by the slice or Pissaladiere (a cross between a quiche and a thick crust pizza) or Socca (a thin savory pancake made out of chickpea flour and olive oil (very similar to the Italian farinata pancakes) and always the ubiquitous Nicoise Salad. I got addicted to this salad and ate it for lunch at least a few times each week and when I came back to the US, I tried my own versions of it. The traditional Nicoise salad uses Tuna fish and Nicoise Olives but often I make it with whatever kind of fish and olives I have in the refrigerator. This time I made it with catfish fillets and I added a bit of paprika and curry powder to give the fish some added zing! This is a great well balanced meal in one dish – the fish and the eggs add the protein element, the salad greens and vegetables are loaded with vitamins and minerals and the potatoes add the starch component. Visually too, it is a beautiful and colorful dish! 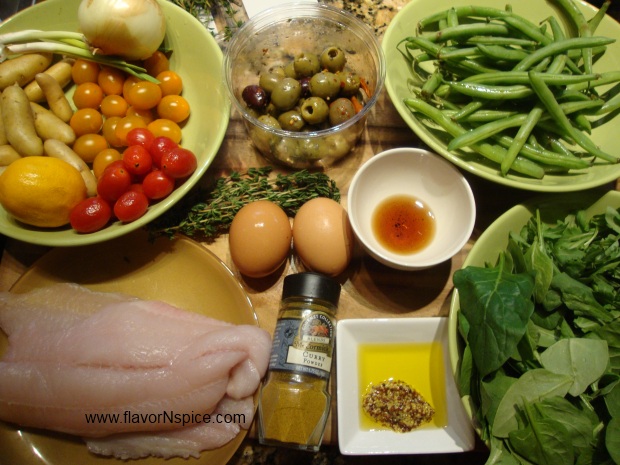 2. A few baby potatoes (I used fingerling potatoes)
3. 20-25 green beans (I prefer Haricot verts but today I only had the regular green beans!)
4. 2 eggs
5. 15-20 olives (traditionally Nicoise olives but I had the spicy cured olives and they worked well)
6. Salad leaves (traditionally the dish has bib lettuce, I used baby arugula and baby spinach)
7. 25-30 cherry or grape tomatoes (I used red and yellow grape tomatoes)
8. 2 tablespoons of extra virgin olive oil
9. 1.5 tablespoons of red wine vinegar
10. 1 tablespoon of coarse Dijon Mustard
11. A couple of spring onions (traditionally the dish has red onion slices but I don’t like the smell of raw onions in this salad)
12. Salt to taste
13. 1 teaspoon of coarsely ground fresh black pepper
14. ½ fresh lemon
15. 1 teaspoon of curry powder
16. 1 teaspoon of sweet paprika
17. A few sprigs of fresh thyme 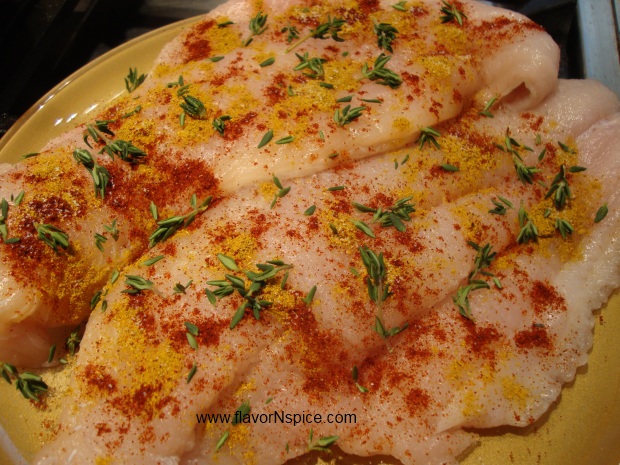 1. Sprinkle the fish fillets with the curry powder, paprika, a little bit of salt, pepper and the fresh thyme leaves.
2. In a small skillet, add a little bit of oil (1-2 teaspoons) and heat it on low heat. 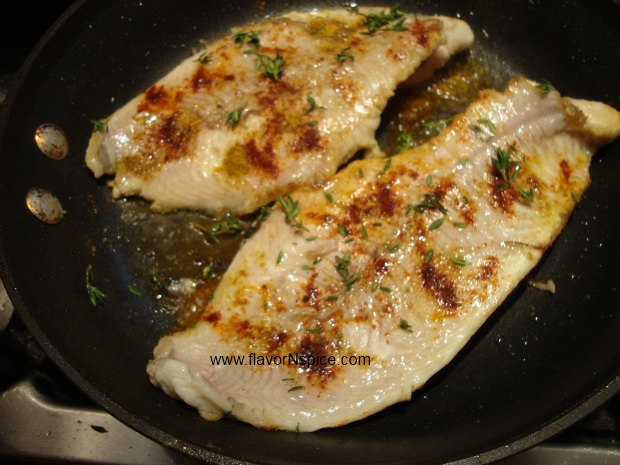 3. When the oil is hot, gently place the fish fillet into the pan and let them cook for 3-4 minutes on each side. 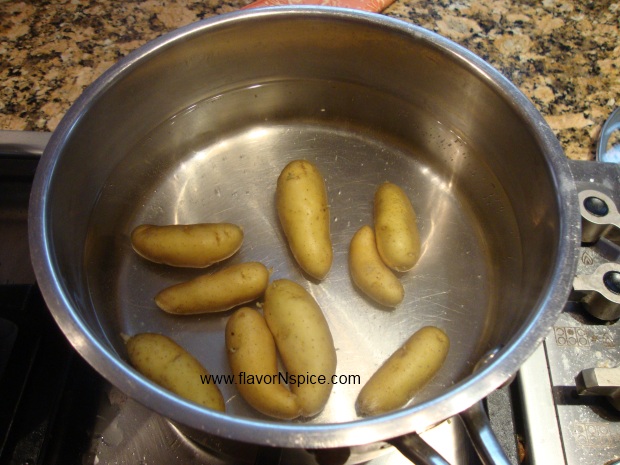 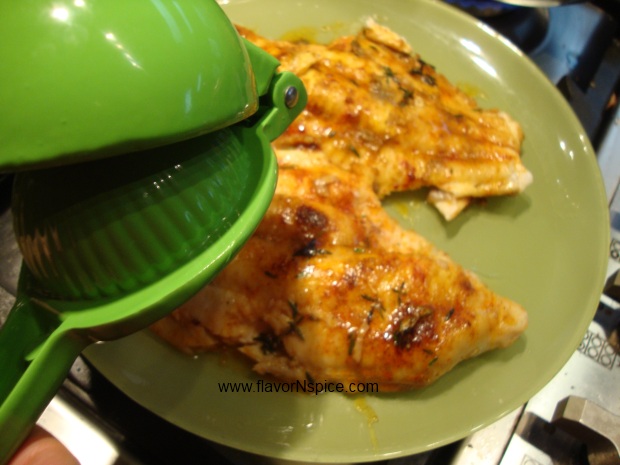 6. Take the fish out of the skillet when it is done and juice half a lemon over the cooked fish and set it aside. 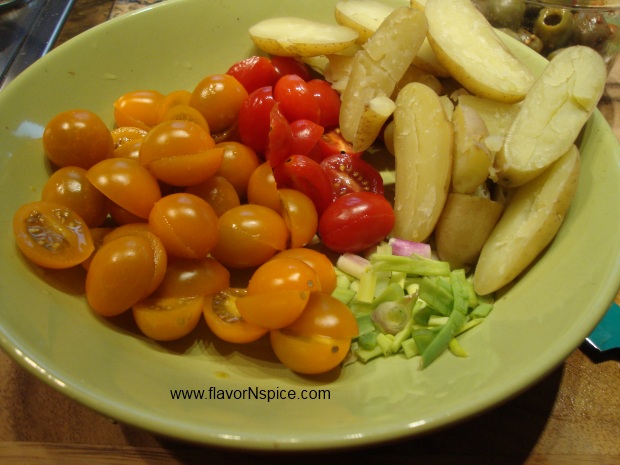 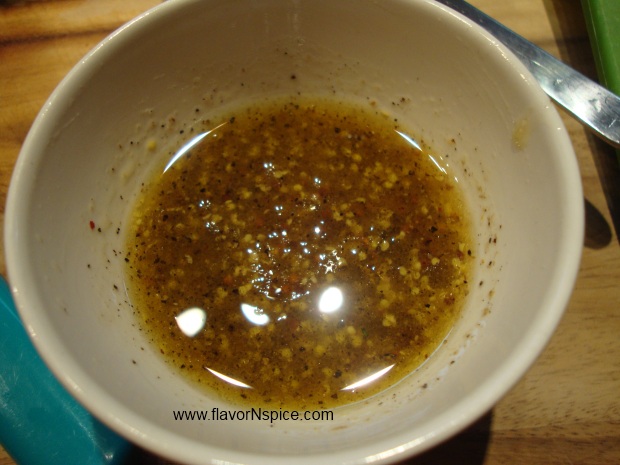 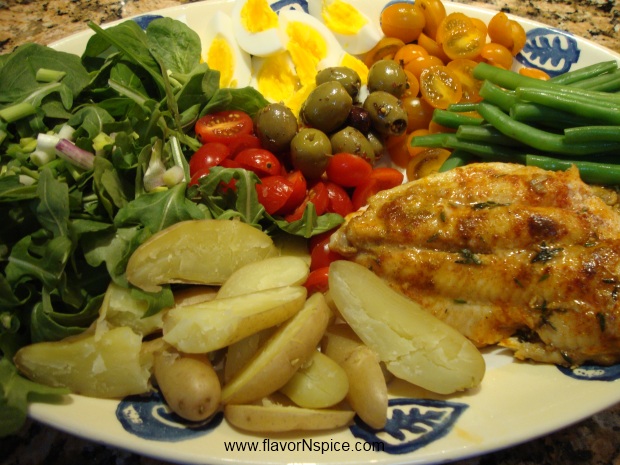 13. Drizzle the dressing evenly over the salad. 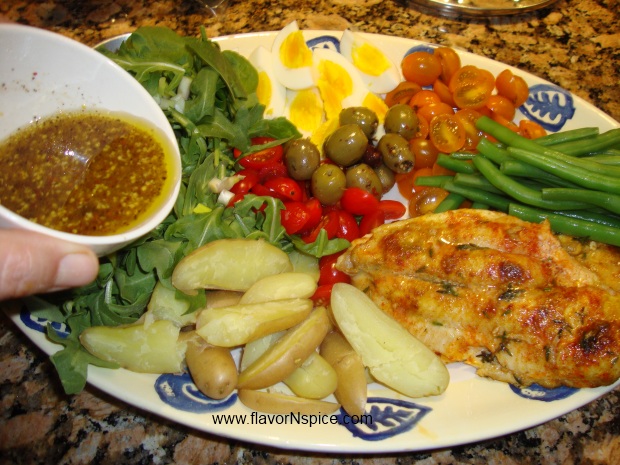 14. Serve the salad at room temperature with a slice of crusty bread on the side. It makes for a satisfying lunch and looks very colorful and inviting! 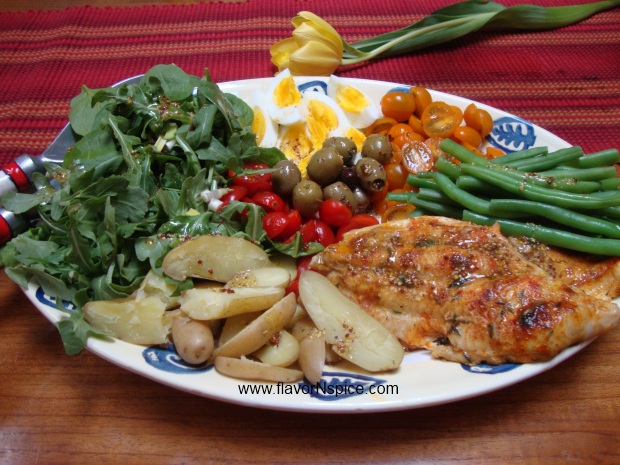