At the very outset I have to confess that I am a terrible baker. Somehow I have never been the one to stick to rules and baking always needs such discipline that after a few failed attempts I gave up on it years ago.  The only problem with this is that I have a major sweet tooth and so each time I crave something sweet, I have to go to a bakery. Last night I had another one of craving attacks but it was late at night and no bakery would have been open at that hour, so I decided to improvise and bake with what I had in my pantry. I found a box of Duncan Hines yellow cake mix and decided to jazz it up with an overload of citrus flavor. So I add the zest of a fresh tangerine and loads of Grand Marnier. I do use cake mixed occasionally but I absolutely hate the cans of frosting that usually go with them. Fortunately I have watched enough cooking shows to know that mascarpone makes for good frosting. So I made the frosting from a container of mascarpone, Grand Marnier, the juice of a tangerine some orange marmalade and some food coloring. Then I garnished with a can of mandarin oranges and fresh pomegranate seeds! This made for a very bright colored booze laden cake that I would not give to anyone who is not of legal drinking age (21!!!!).  I used only frosted one of the four cakes that I made with the box of cake mix, but if you are going to frost the one large cake you make out of it, you may need to adjust the quantities of ingredients accordingly – for one large cake you will need to triple the quantity of Mascarpone and all the other ingredients for the frosting. 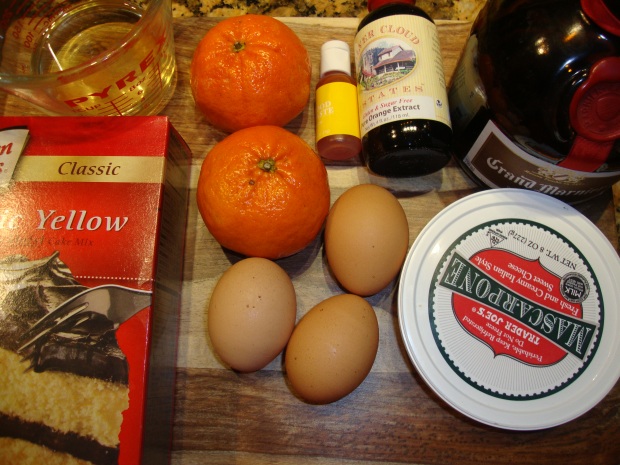 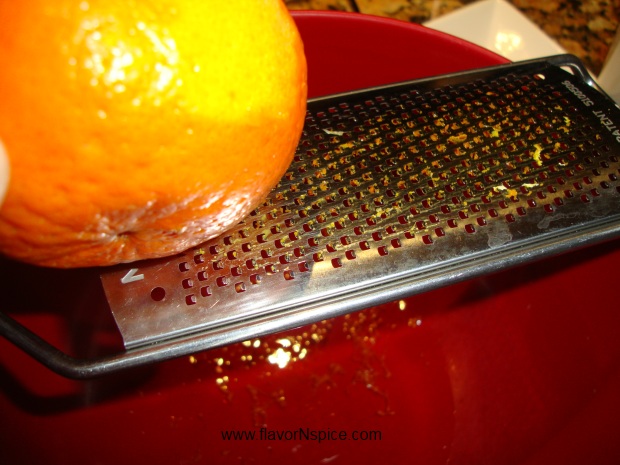 2.    Follow the directions on the cake mix (except do NOT add the cup of water) and mix the following in a large mixing bowl: 3 eggs, 1/3 cup oil (I used light olive oil for cooking – not extra virgin), the cake mix and then add the zest of one tangerine. 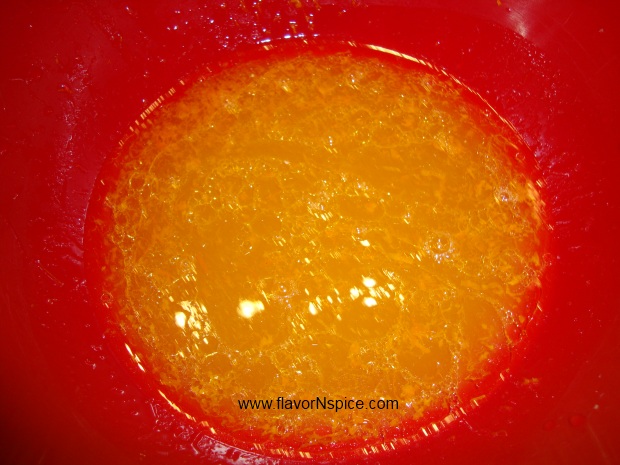 3.    Instead of the cup of water, make a cup of the following liquids: Juice from three tangerines or Clementine’s, one tablespoon of Grand Marnier, 1 teaspoon of orange essence, 3-4 drops of orange food coloring paste (I bought mine at William Sonoma).  Place all these in a measuring cup and then add cold water to this liquid till the level comes up to one cup.  This is to replace the one cup as suggested on the cake mix box. 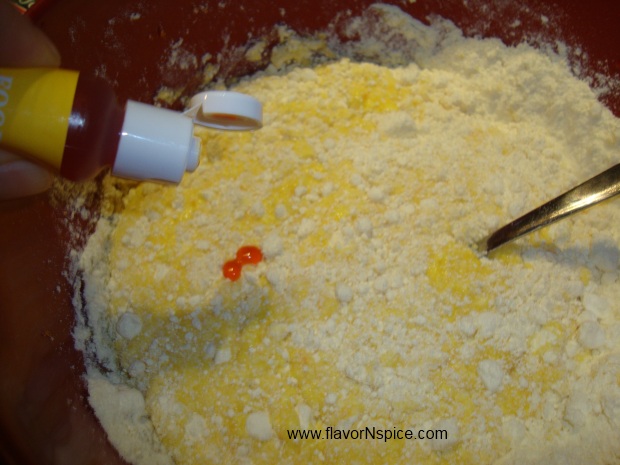 4.    Add this liquid to the mixing bowl and beat the mixture till it is completely mixed in and no lumps remain.
5.    Oil the base and sides of a cakepan; I used four small containers instead of one large one.
6.    Place the cake(s) in the oven for 25 minutes (check on them frequently as the heat level of each oven varies a little and also whether or not you are using a regular oven or a convection oven).  After 20 minutes, use a toothpick to see if the cake is done and take it out when it is done.
7.    Cool the cake(s) completely before spreading the frosting over them. 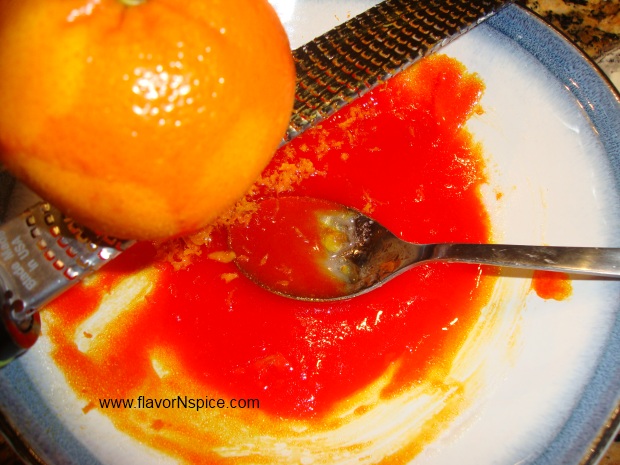 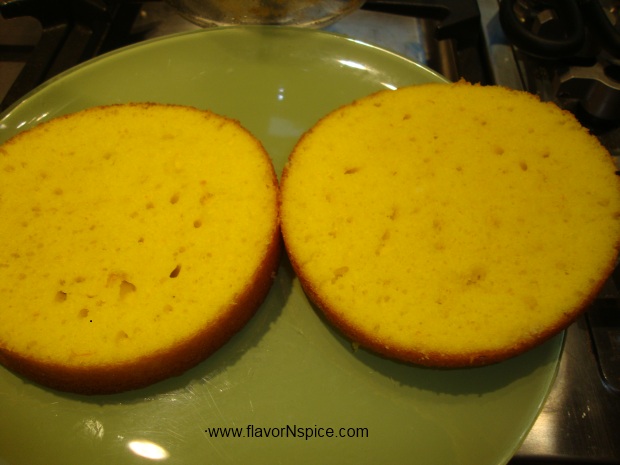 9.    If the cake is not even (and has risen a little bit) use a serrated knife to flatten it on both surfaces and then use the knife to cut the cake horizontally in two equal halves. 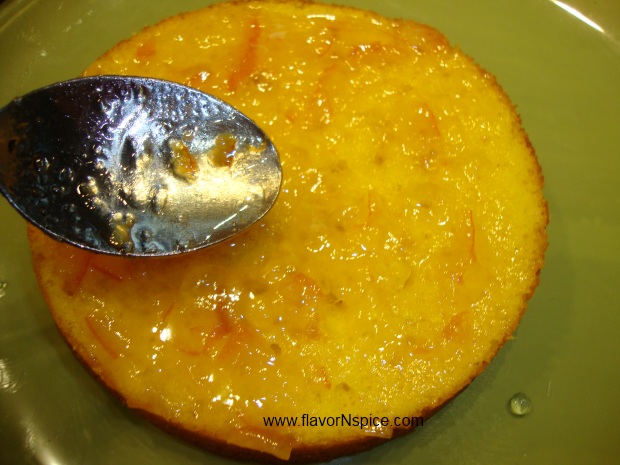 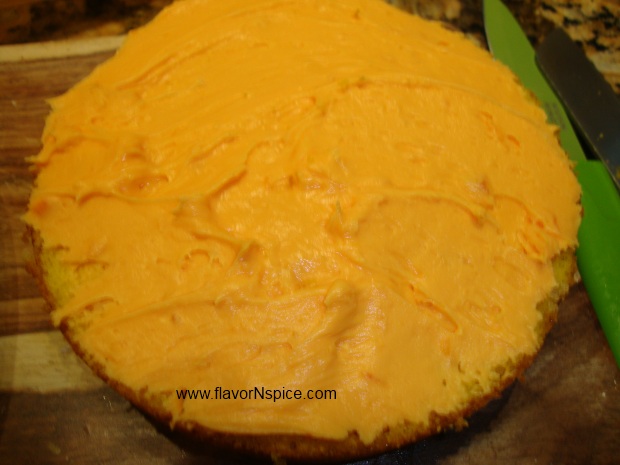 11.    On the other circle of cake, spread a thin layer of the frosting.
12.    Join the two circles together so that the surface that had Grand Marnier and the other surface with the frosting on it are fused together. 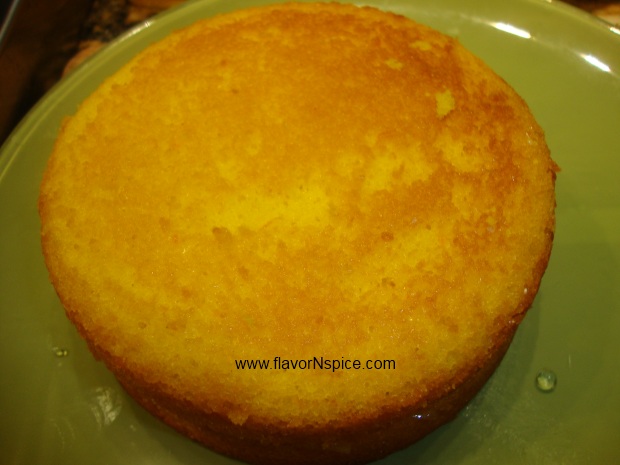 13.    Using an icing spatula over the top and the sides of the cake with the remaining frosting.
14.    Garnish with slices of canned Mandarin Orange and the fresh pomegranate seeds. 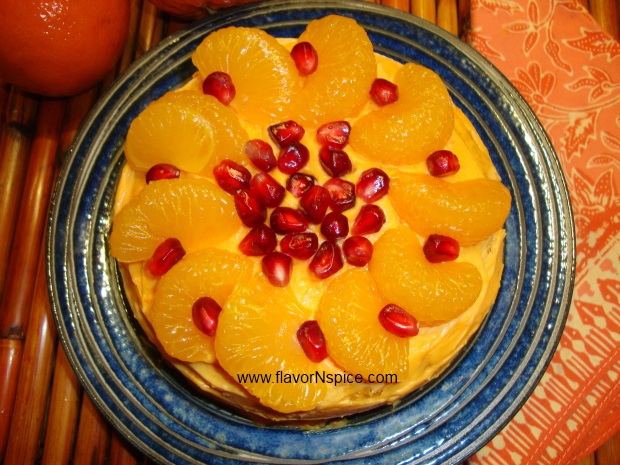