Hurricane Sandy knocked me off my routine for quite a few days.  Despite early dire predictions, fortunately, our area was spared any major damage (I live in a suburb of Washington DC)! Miraculously, we did not even lose power!  The storm took a northward turn and though that spared us, it hit further north in horrific ways.  I have been glued to the news coverage of the devastation in New York and New Jersey.  I have several friends who have been badly affected by the storm – with flooded houses and no power! Sandy left the area a few days ago but its impact is still very palpable.  It was such a huge storm that even days after its eye blew over the East coast, we still had windy, grey and cold days. Every year, at the beginning of fall, I feel a malaise settle over me when days start to get cold and shorter but this year the storm made it even worse.  Over the past week, I have been feeling so blue that I didn’t feel like cooking anything and as a result my blog went through a period of complete lull.  My husband and I lived off of sandwiches and frozen meals for quite a few days but finally today the sun is out and things started to look a little less dreary – so I shook off my lethargy and decided to make a hot meal for us.
Appropriate to the time of the year (when the leaves have fallen and the cold has started to settle in) I decided to make a very fall-inspired recipe for roast pork tenderloin.  A couple of weeks ago, a friend of mine had invited us for dinner and she had served pork tenderloin glazed with a red wine reduction and caramelized apples on the side.  It tasted magnificent but I didn’t have her exact recipe, do I had to wing mine.  I stuffed my tenderloin with an apple and dried apricots. I added the remnants of fresh rosemary and sage that were left in my herb garden and I basted it with some red wine and Dijon mustard.  I also added baby potatoes on the side. Probably this was a bit too fancy a lunch for just my husband and I, to be eating by ourselves on a chilly Sunday afternoon but hey, after the depressing week, we needed some major dose of comfort food and it sure worked to cheer me up a tad bit. 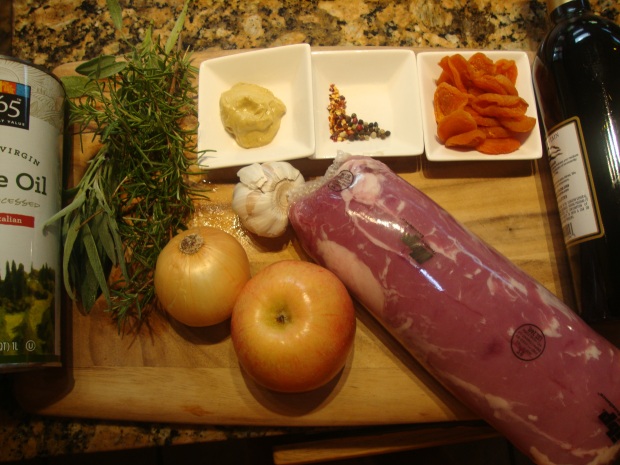 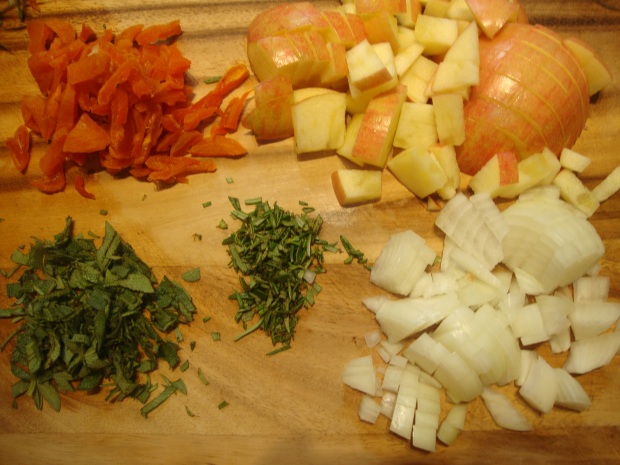 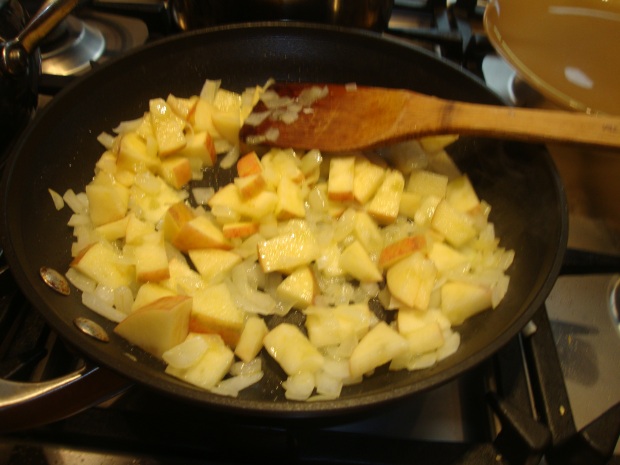 6.    In a small skillet, heat one tablespoon of olive oil and then add the onions and apples to it. 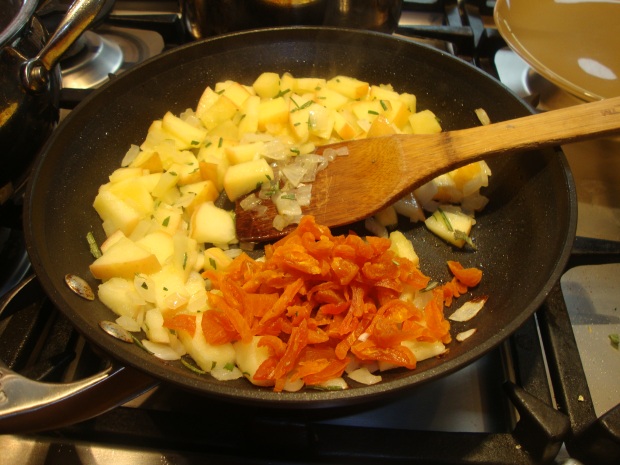 7.    When the onions and apples are a little cooked (after 3-4 minutes of cooking and stirring), add the chopped apricots and stir.  Also add half of the chopped rosemary and sage leaves and stir again.  Cook these for 3-4 minutes and set them aside to cool down. 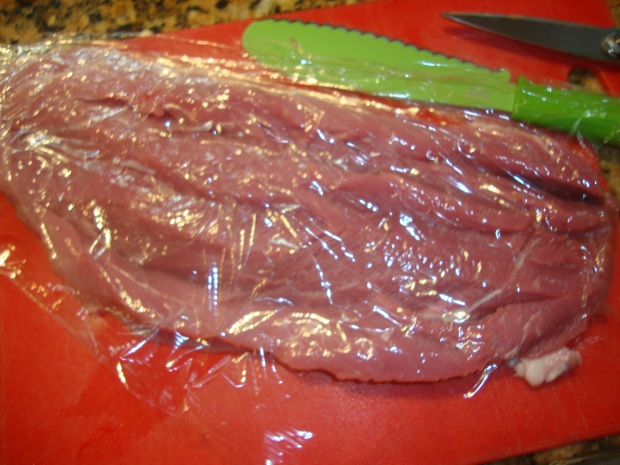 8.    Place the pork tenderloin on a cutting board and using a sharp knife, butterfly the meat – so that it is about an inch thick flat slab.
9.    Place a sheet of plastic wrap over it and using a meat mallet, gently pound the meat to get it to be of even thickness.
10.    Season the meat with salt, red pepper flakes and some ground black pepper. 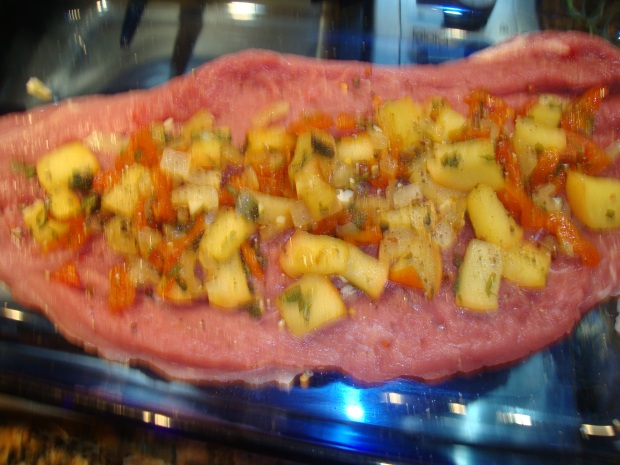 11.    Place half of the onion, apple and apricot mixture in the middle of the meat slab. I apologize for the quality of this picture – my camera lens got a smear of oil on it and before I could detect it the picture was spoiled and blurry!
12.    Roll the meat over so that the onion, apricot and apple mixture gets stuffed inside it.

13.    Secure the sides of the stuffed pork with two toothpicks so that the stuffing cannot escape from the sides during the roasting process. 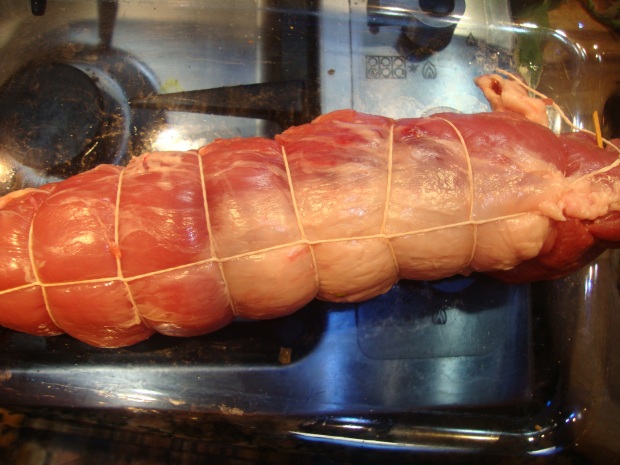 14.    Using the kitchen twine, tie the tenderloin in such a way that the stuffing stays secure inside. Sprinkle some salt over the meat.
15.    Place the pork in an oven safe dish (Pyrex works well).
16.    Grate the cloves of garlic and mix them which the Dijon mustard to make a wet paste. 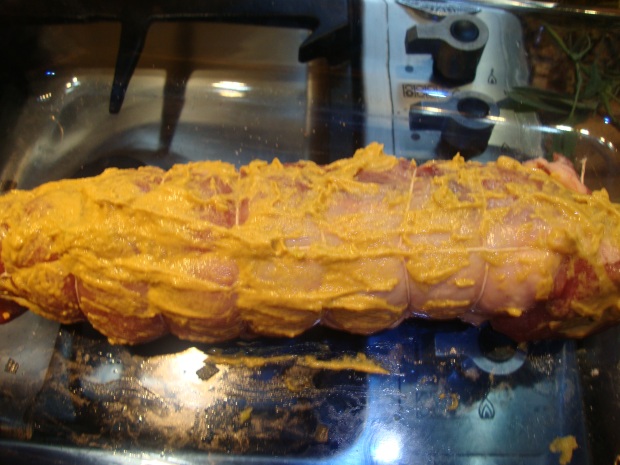 17.    Rub the paste over the outside of the tenderloin. 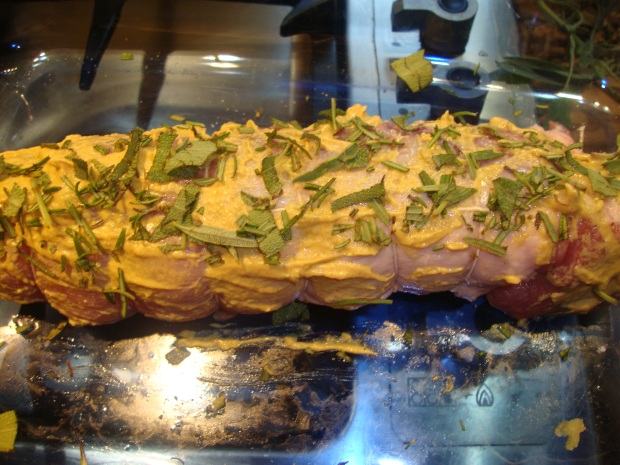 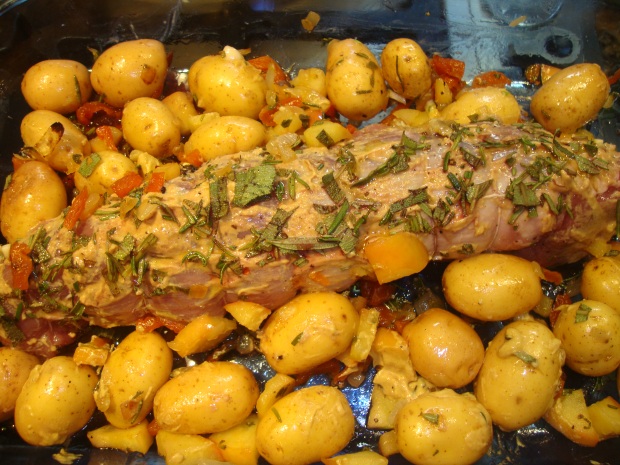 20.    Add the baby potatoes to the dish and also the remaining amount of onion, apple and apricot mixture.  Mix these ingredients with the wine and olive oil mixture at the bottom of the dish.
21.    Place the dish in the oven at 425 degrees Fahrenheit for 30 minutes. 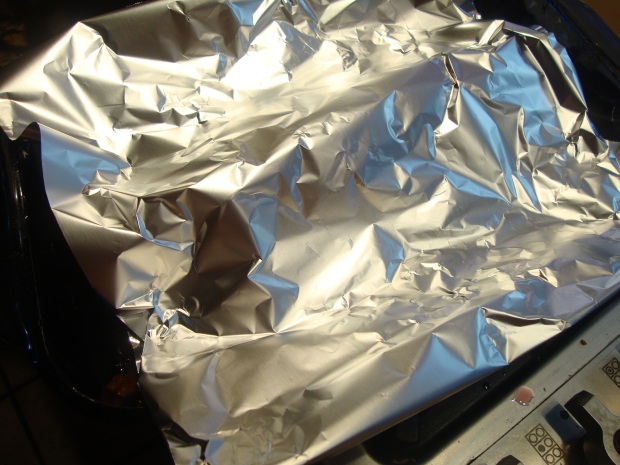 22.    After 30 minutes take the dish out and place a tin foil tent over the meat and turn the potatoes over and place the dish back in the oven for another 15 minutes at 325 degrees Fahrenheit. 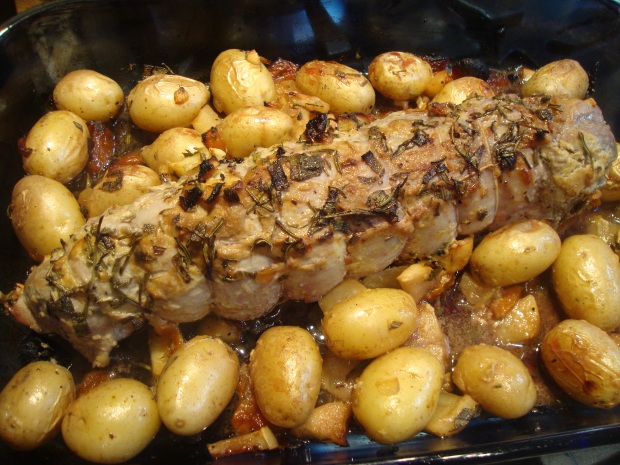 23.    Take the meat out of the oven and let it rest for 15 minutes.
24.    Using a pair of kitchen shears, cut the kitchen twine off the meat and then slice the meat into one inch thick slices.  Serve the meat while it is still hot with a side of the roasted potatoes.
25.    I made a sauce to go with the tenderloin by caramelizing two shallots in a little bit of olive oil. To this I added one tablespoon of all purpose flour and cooked it with the onions fo 5 minutes on medium heat. Then I added 1/3 cup of wine, salt to taste, some rosemary leaves, pepper, one tablespoon of honey and ½ cup of chicken stock and let these cook on low flame for 4-5 minutes. 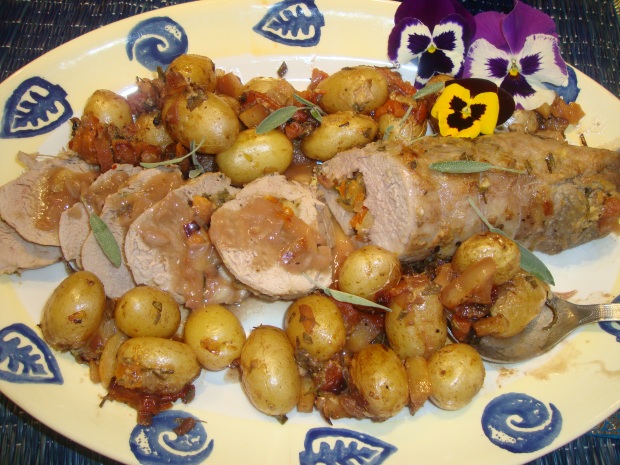