I started this food blog in February of 2012 and a few days after I posted some recipes, I got a very encouraging comment from someone who is the marketing director of a tandoor-making company in the US (www.Homdoor.com).  She really liked my blog and asked me if I would like to contribute a recipe to their facebook page and of course I was happy to get this chance especially since I was such a newbie  in the big and alien food-blogosphere and Homdoor was an established company which had been in business for so long! Then I spoke to her on the phone and exchanged a few emails, following  which I met her at a food festival in New York City and before I knew it, I had struck up an amazing friendship with her.  Over the past few months, her input on my blog has been invaluable and I often think of our serendipitous introduction and wonder at how I got to be so lucky as to find a friend entirely by chance, who has so much in common with me (we have kids the same age and our outlook on parenting and life in general is very similar, and most importantly we both LOVE food!). Our friendship is quite reminiscent of the kinds of friends people used to have when they had pen-pals/pen-friends across the globe!
Homdoor is a company that has been in existence for over 20 years.  The New York Times wrote an excellent piece on it about a year ago (http://www.nytimes.com/2011/05/11/dining/a-tandoor-oven-brings-indias-heat-to-the-backyard.html?pagewanted=all).  Their tandoors form the backbone of most Indian or Afghani restaurants in the US because tandoori food is the most popular kind of South Asian food here.   I had read the article in the New York Times but had never imagined that I could some day get to experiment with a real-life tandoor.  When I was growing up in India, we often ate tandoori food but no one had a tandoor at home.  Usually there were roadside stalls that had clay tandoors and we would either take our own dough for the tandoor owner to make tandoori rotis for us or we’d just go there and buy the already cooked tandoori chicken or fish from the vendor. This was the quickest, most inexpensive and not to mention the tastiest take-out food that I had known in my childhood!  Even though I have eaten a lot of tandoori food, I had never actually used a tandoor in my life.  So when Homdoor asked me if I would be willing to be a beta-tester for their new line of tandoors made for the home-cook, I was thrilled at the chance to try my hand at something familiar and yet a completely new experience for me.  From the time I first spoke with them and until I actually got the tandoor delivered (JUST TODAY!!!), it took about 3-4 months and during this time I researched various kinds of recipes that could use the tandoori style of cooking and took notes on the things that I would like to experiment with.
This afternoon the 180 lbs package was delivered by FedEx and right away my husband and I got busy unpacking it. The inner vessel of the Homdoor is a 3-4 inches thick ceramic cylinder with is encased in a heavy-duty sturdy steel exterior shell. Homdoor has thought of every kind of convenience that one can imagine – this model came with wheels on casters (which were easy to install), and accompanying accoutrements such as six metal skewers with wooden handles, two hook-like implements for pulling the bread out and even a pad for sticking the flat bread onto the side of the tandoor!

I promptly went out this afternoon to buy some fresh fish because we have an excellent local vendor who brings his truck to Bethesda every Friday (Bethesda readers take note – this is clearly the most reasonably priced sushi-grade-fish you can find in Bethesda. Check them out at www.salt-river-lobster.com).  I marinaded the whole Bronzini fish in tandoori spices and started my experimentation with the new toy.  At first I was not sure if the tandoor would be any different from a regular charcoal grill but after I tasted the fish that we made in the tandoor today, I am convinced that there is a quite a big difference. The tandoor takes very little charcoal (I used only about 25-30 charcoal pieces today) to reach quite a high temperature and the ceramic cylinder is extremely efficient at keeping the heat trapped inside – so the result was that the fish I cooked took only 10-12 minutes to get done and unlike the grill where the heat comes from one direction (and therefore one side of the food gets cooked, while the other side is still completely raw), here the fish was completely surrounded by an even heat source and the effect is the same as that in a convection oven.  The charcoal gave the fish a good smoked flavor without burning the exterior of the fish.  Today’s experiment was indeed a success in my household – it got two-thumbs-up from my husband and our son!  If you don’t have a tandoor, a regular grill will do just as well. Just be careful to turn the fish before either side gets overcooked from the direct heat of the charcoal. 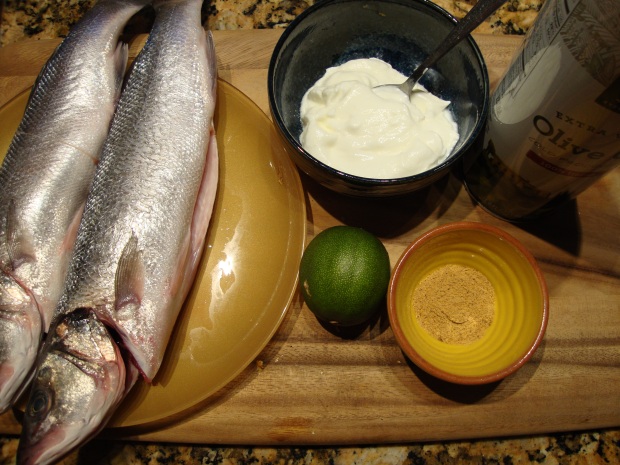 1.    Light the charcoal in the tandoor or the regular grill and while the charcoal gets hot, you can go on with the following directions – 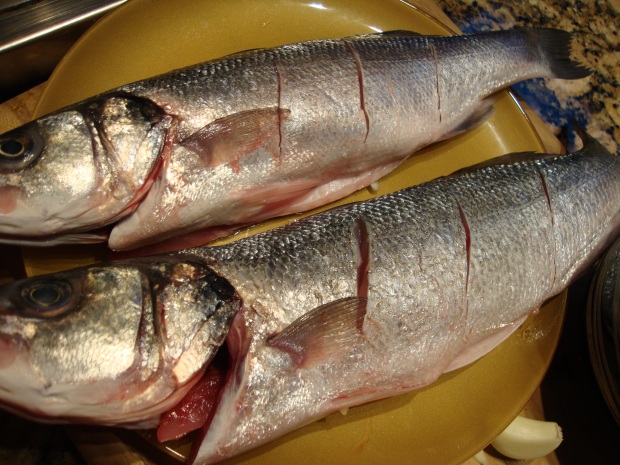 2.    Wash the fish under a stream of cold water and pat it dry from the inside and the outside with dry paper towels. Set the fish aside.
3.    In a bowl, mix the yogurt, tandoori masala, the juice of ½ the lemon (keep the other half for use later), olive oil and the ground coriander powder to make the marinade. 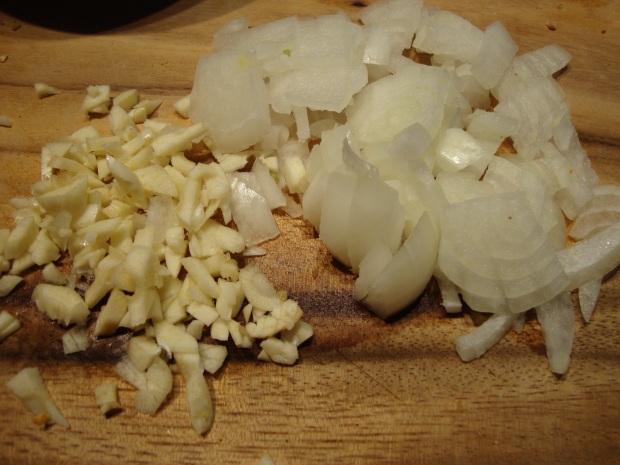 4.    Peel and dice the onion in very small pieces and set aside.
5.    Peel and chop the garlic cloves in small pieces (as fine as you can) and set aside.
6.    Using a sharp knife make3-4 slits in the flesh of the fish (along both the sides).
7.    Open the fish and spread a tablespoon or so or the chopped onions and a teaspoon of the chopped garlic in the body cavity of the fish.
8.    Also pour the marinade inside the fish, in the slits made in the flesh of the fish and also on top of the skin. 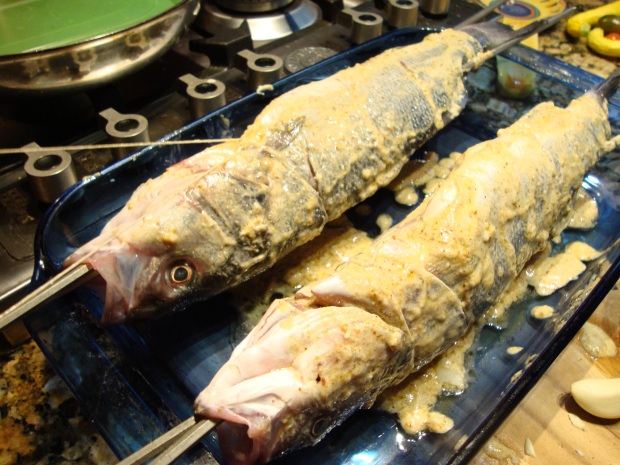 9.    Repeat the same steps for the second fish.
10.    Using a sharp long skewer, skewer both the fish (in through the mouth and out near the tail). Also use the kitchen twine to tie the fish close to the thickest part of its belly – so that the onion and garlic pieces stay inside the cavity of the fish.
11.    When the coal is hot and ready to be used for cooking (gets grey in color on the exterior), place the skewered fish in the tandoor and cover the tandoor. 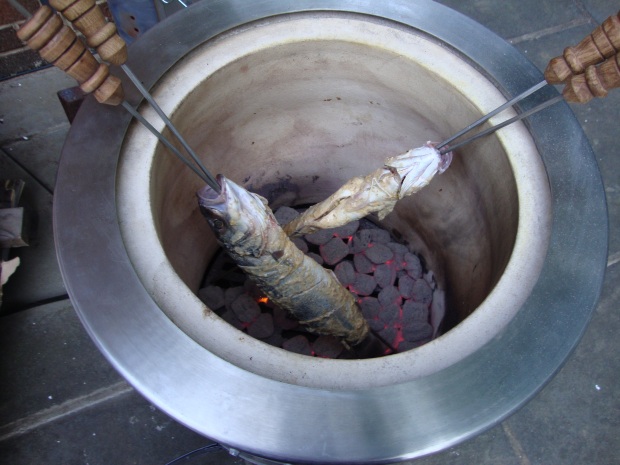 12.    Grill the fish inside the tandoor or charcoal grill for 10 minutes or so (depending on the heat generated and maintained in the grill) – check for done-ness after 5 minutes and turn the fish if necessary. 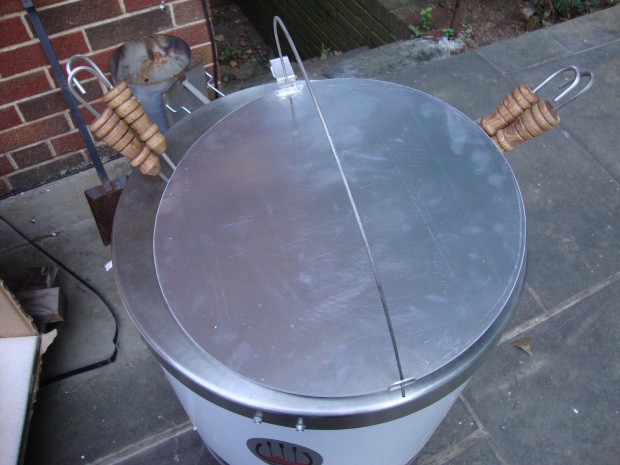 13.    When the fish is cooked thoroughly, take it out of the tandoor/grill and take the skewers out.
14.    Sprinkle the juice of half a lemon of the fish and serve it while it is still hot. 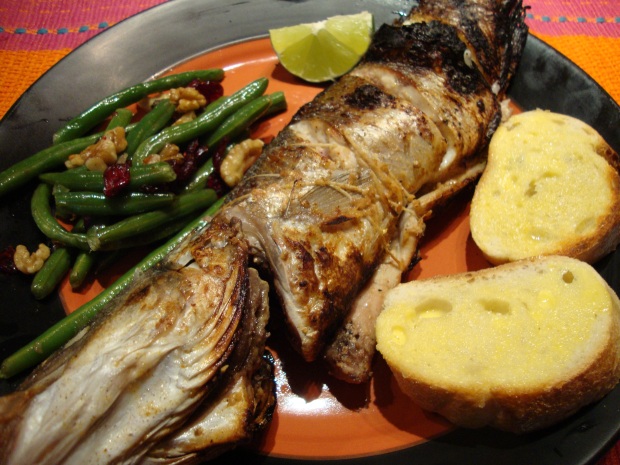