Over the past couple of weeks, we have had an unprecedented heat wave in the Washington DC Metro area (which has broken all previous records). Last week we were hit by a freak wind and thunderstorm which resulted in the loss of power to over two million households in the region. The Governor of Maryland declared a state of emergency and also a ban on all non-essential water usage.  As it is, my poor vegetable patch had been doing extremely poorly under the intense heat but getting no water meant sure-shot premature death for most of the plants.  I tried to salvage whatever veggies were still on the plants by harvesting them immediately and I got an assortment of squashes, some green bell peppers and a couple of tomatoes.  The only way to use this paltry harvest of an assortment of veggies was to combine them in one recipe. A while back I had seen a recipe for Turkish zucchini pancakes so I decided to tweak that recipe to work with the veggies I had on hand.  I have to say the result was really delicious and even my teenaged-totally-carnivorous-son ate a few – which I guess should be proof enough that the pancakes were indeed successful! 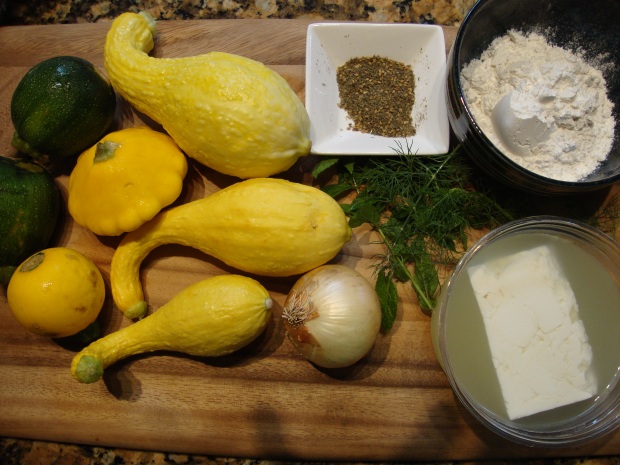 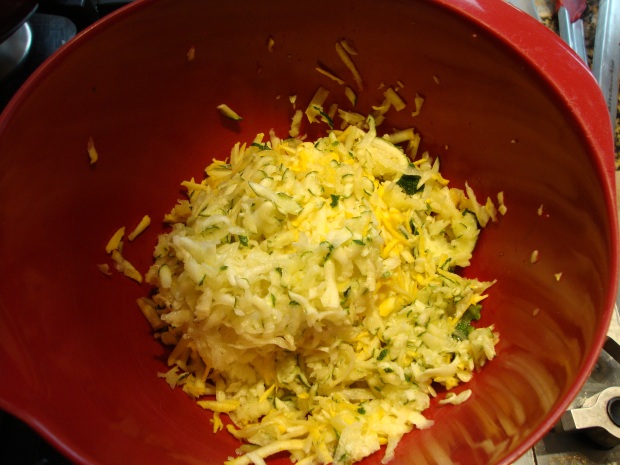 1.    Wash the various squash thoroughly and using a hand-held grater, coarsely grate them in a large mixing bowl.
2.    Peel the onion and finely dice it and add to the mixing bowl 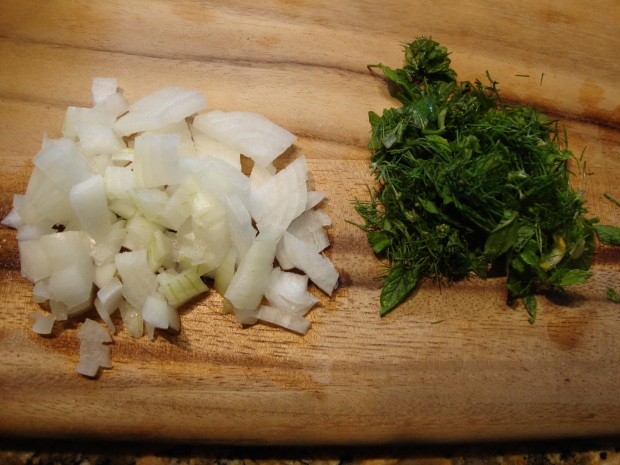 3.    Wash the mint and dill sprigs (remove any hard stems) and finely chop the leafy ends and add to the mixing bowl. 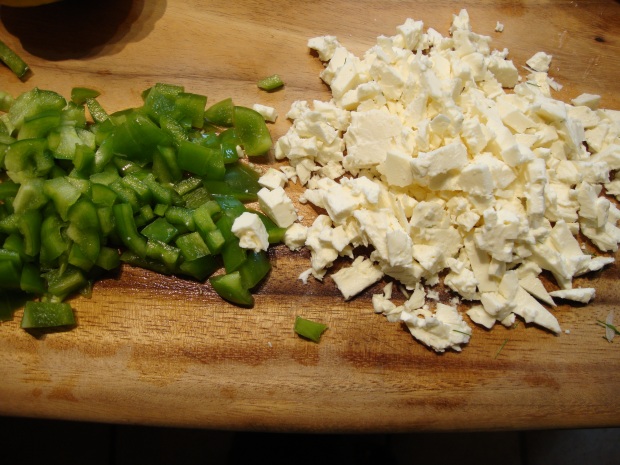 4.    Wash and finely dice the green pepper (remove the seeds) and add to the mixing bowl. 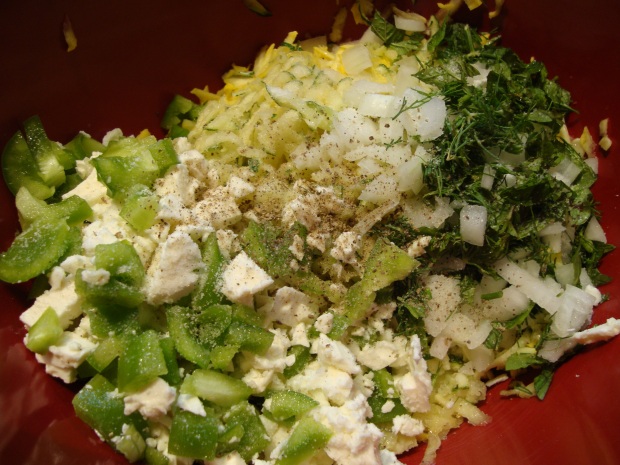 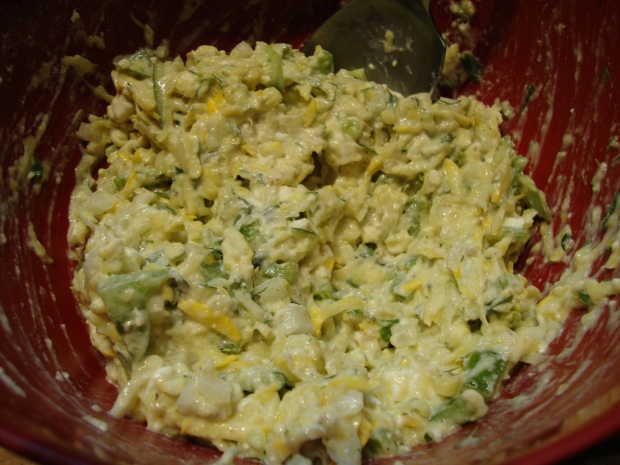 6.    Heat a small skillet or non-stick pan on medium heat and add a tablespoon of olive oil to it.
7.    With a large serving spoon add about 2-3 tablespoon of batter to the hot skillet and flatten the batter out to give it pancake shape (about ¼ of an inch thick). 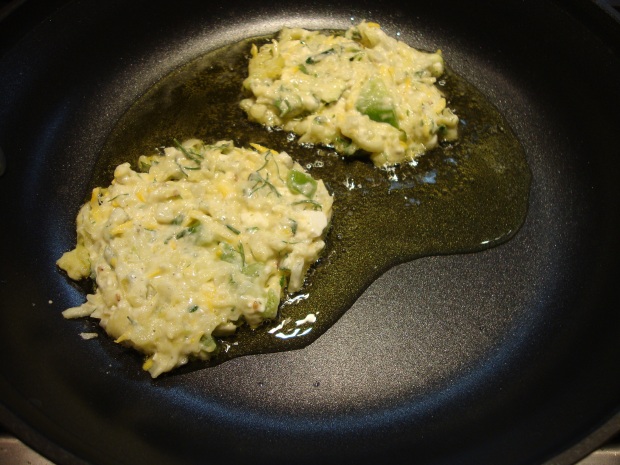 8.    Also pour in batter for another pancake or two to the pan but do not overcrowd it. 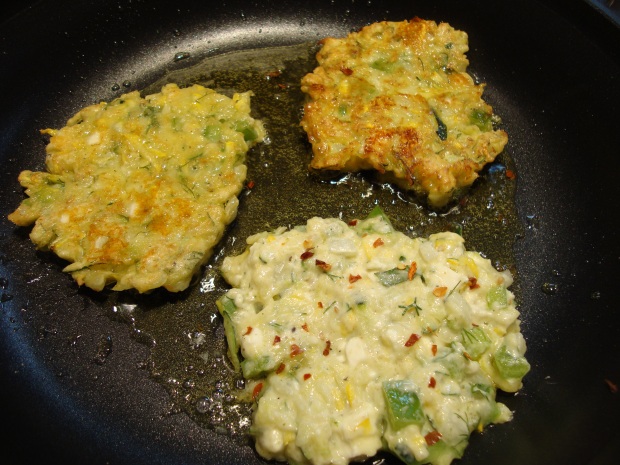 9.    Cook the pancakes on high heat at first to get a crunchy outer coating and later lower the heat so that the inside of the pancake gets cooked thoroughly.  Flip the pancakes when one side is browned and crispy.
10.    Place the cooked pancakes on a dry paper-towel to soak up any excess oil.
11.    Serve the pancakes when they are still hot and crunchy with a side of Labneh (or sour-cream) sauce.  The sauce can be made by adding a teaspoon of sugar, a pinch of salt and finely chopped fresh 8-10 mint leaves to 3-4 tablespoons of Labneh (mix these ingredients thoroughly). 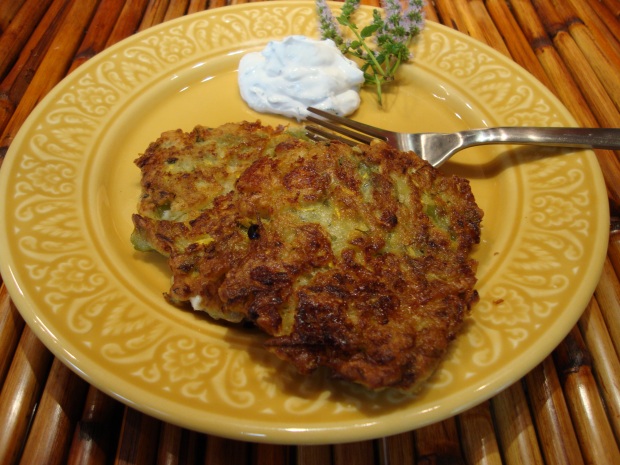