Understandably, most people who have not grown up in the Japanese culture, are squeamish about eating raw fish.  I too  used to be one of those people that found Sushi intimidating.  After the initial hesitation when I did try sushi and even sashimi, I realized what I had been missing out on.  Now I tell most of my friends that hesitate in trying it that they should first try out the vegetarian rolls (with asparagus, cucumber, tempura beans or avocado), then go on to the cooked seafood like tempura shrimp or crab or smoked salmon and then finally move on to raw fish.  This way the person gets introduced to the concept before diving into full blown alien Japanese food and flavors.
So now I love sushi of any kind and I especially like watching the sushi chefs at work.  Japanese food is as much about visual appeal as it is about taste and texture.  This is why the aesthetics of the presentation is what takes the longest time to master. Japanese culture is so subtle in its craft, taste and artistry that if one is not tuned into it (or introduced to it by someone who knows a lot about it) its beauty can be totally lost on an outsider.  This is why observing the process of how the various chefs present their sushi, nigiri or sashimi is the most fascinating part of the process.  I am completely mesmerized by it and have attempted it many times but as yet I haven’t mastered the required precision in this art form.  For now I am just thrilled that I have managed to get the taste down and the rest of it may come with more time, experience and patience.

1.    Cook the rice in a rice cooker (with two cups of water in it).
2.    When the rice is done, let it cool down.
3.    When the rice has cooled down, mix the vinegar, sugar and salt in a small bowl till the sugar is dissolved and mix it in the cooked rice and stir everything well. Set this rice aside.
4.    Then put the two cups of cooking oil in a pan and start heating it on medium heat. 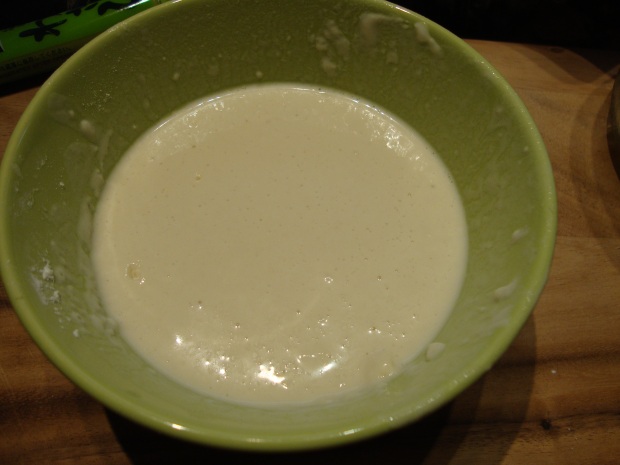 5.    While the oil is heating, mix the tempura batter (mix the proportions according to the directions on the box). 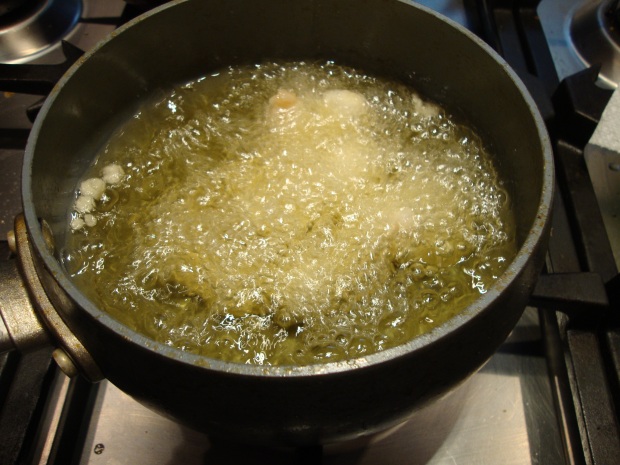 6.    Dip some shrimp into the batter and drop them into the hot oil and fry them for 3-4 minutes or until they look golden brown and crispy. 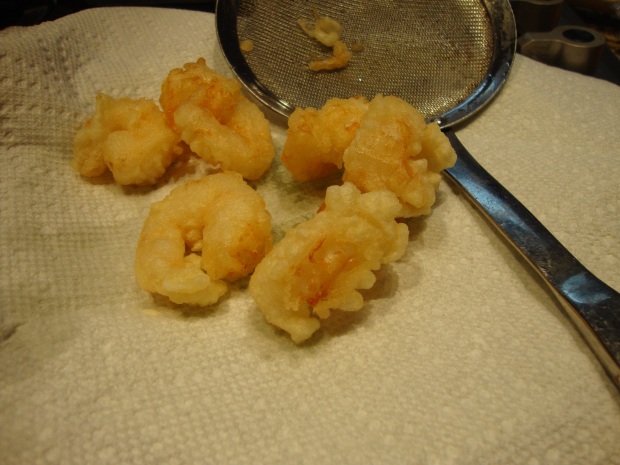 7.    Take the shrimp out of the oil and let them drain their oil out on a dry paper towel. 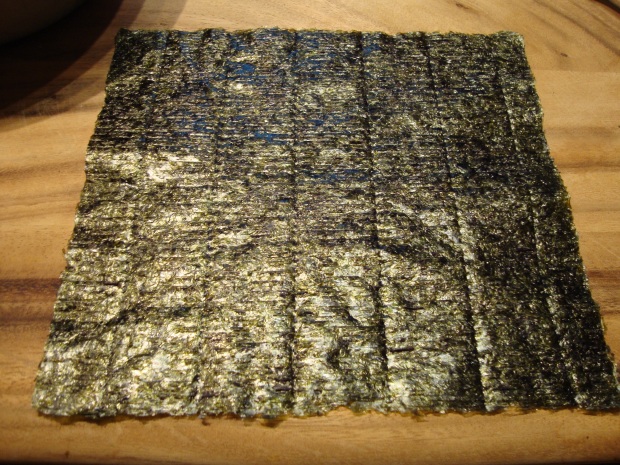 8.    While the shrimp are draining their oil, take of a sheet of seaweed and place it on a wooden cutting board. 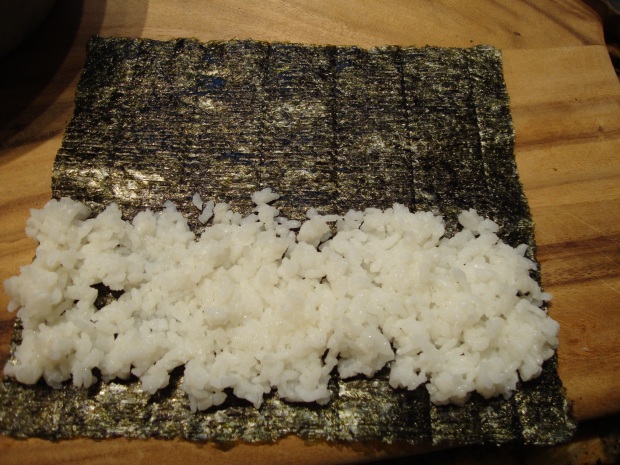 9.    Spread about a 1/4 cup cooled sushi rice on one end of the seaweed and using your hands press down on the rice to get an even layer. 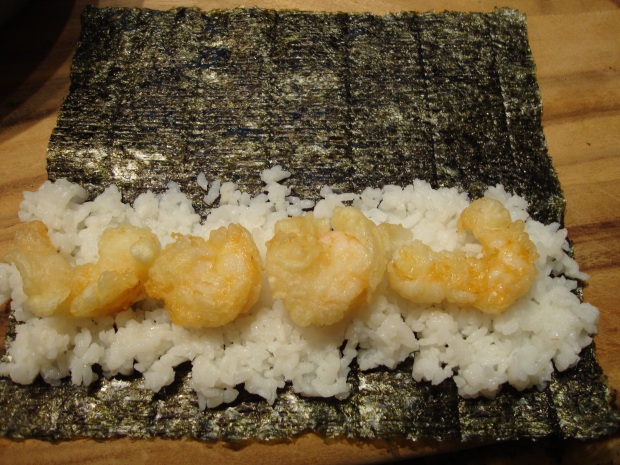 10.    Spread out a layer of shrimp tempura (or whatever else you would like to add to the sushi) on the rice and make a roll with your hands. 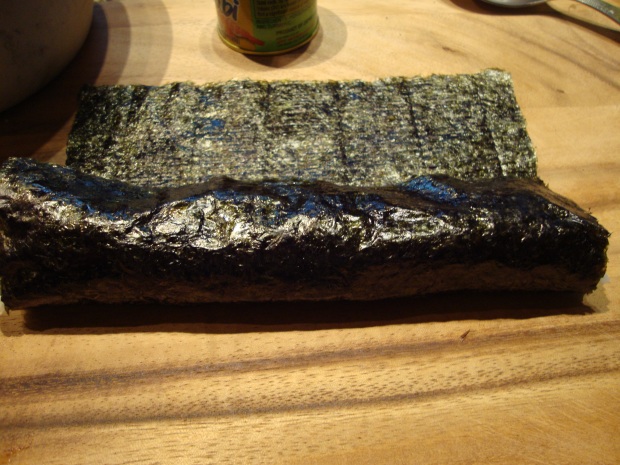 11.    Roll the seaweed paper tightly with both your hands to make a long sausage like roll. 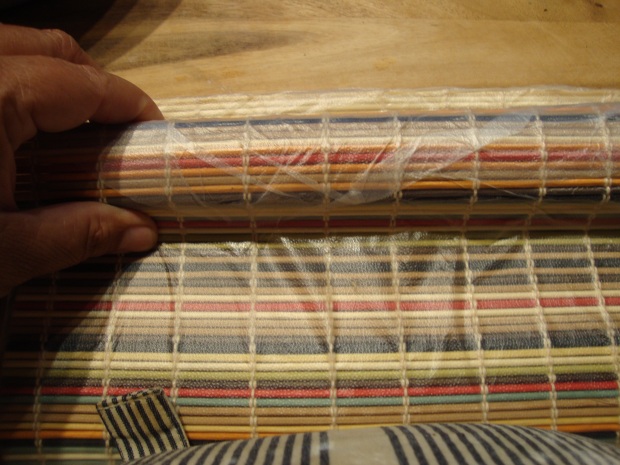 12.    Using a bamboo mat covered with cling-wrap (I could not find my regular sushi mat and so I improvised with a bamboo place mat – it worked just fine!), press down on the roll with both your hands to give it the sushi shape. 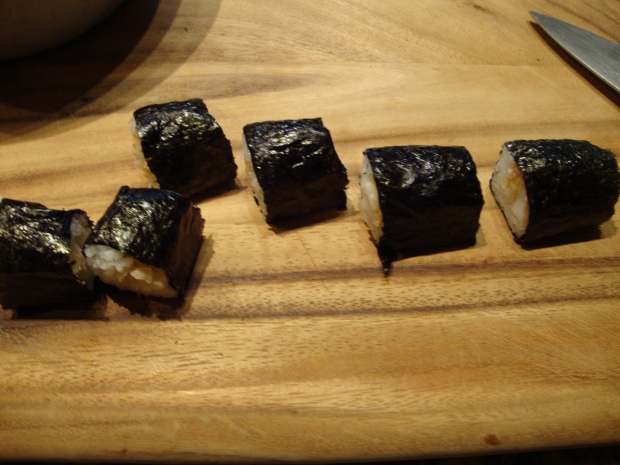 13.    With a sharp knife, cut the roll into 6 pieces and serve them on a flat plate with soy sauce in a small dish and wasabi and pickled ginger on the side. 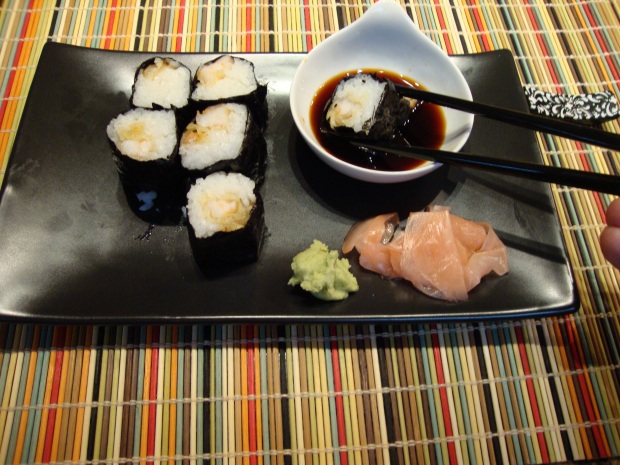