Last weekend I bought a few dried Morels from a vendor at our local farmer’s market and I was very excited about experimenting with them.  The only problem was they were just a handful of mushrooms (they cost an arm and a leg) and so I wanted to make use of them in a way that could get the most out of them – to infuse their earthy flavor to some other ingredients.  Initially I planned to take the most obvious route and make Morel mushroom risotto, but then I changed my mind.  I wanted to make use of them in an Indian dish and combine them with the strong spices to bring out their woody flavor.
I remember that my mother used to talk about the times when she was very young and growing up in what is now Pakistan (at that time it was India because it was before the Partition of India in 1947), it was quite common for families to go mushroom hunting in the crop fields or the woods and come back with a haul of Morels (they used to call them Guchchi mushrooms). The women in the family would then dry them out in the sun for use through the year.  My mother used to speak very fondly of those days and in her head these mushrooms were forever associated with her idyllic childhood.  While I was growing up in Delhi, these Guchchis were a much coveted item and even if one were willing to pay the price for them, it was hard to find good quality dried mushrooms and so I only got to eat them on rare occasions.
Ultimately I made spiced cauliflower with Morels and a basmati rice pilaf (to utilize the flavorful water the morels were soaked in) with morels and green peas.  The result was amazingly good – the two dishes tasted wonderful and the aroma of the smoky morels filled my whole house up.  Even before I was done cooking, my neighbors knocked at the door to ask what I was making because the aroma had wafted down the street – that was some testimonial indeed! 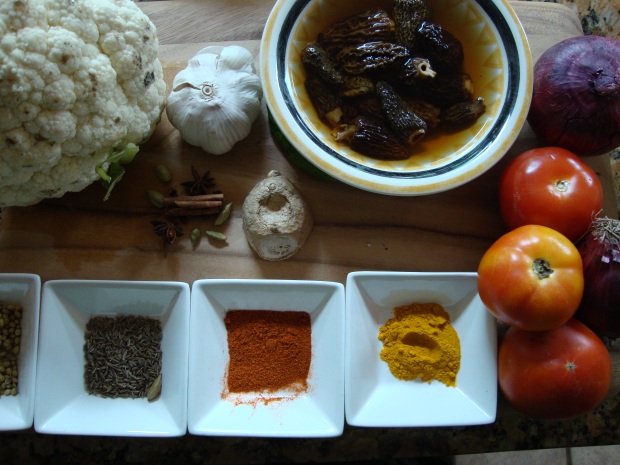 For cooking the Cauliflower: 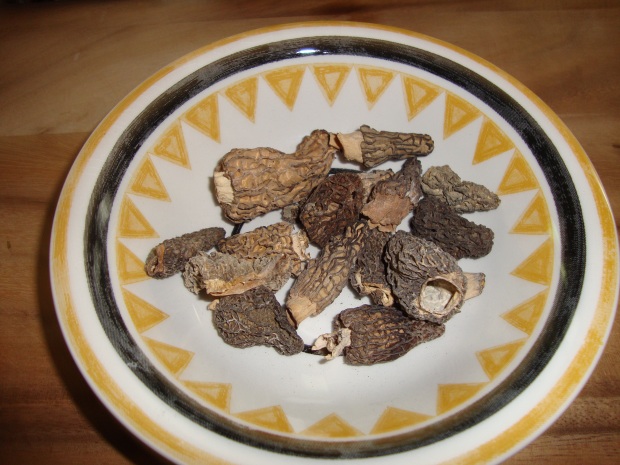 1.    Pour a cup of hot water over the Morel mushrooms and let them soak in this water for 30 minutes or so. 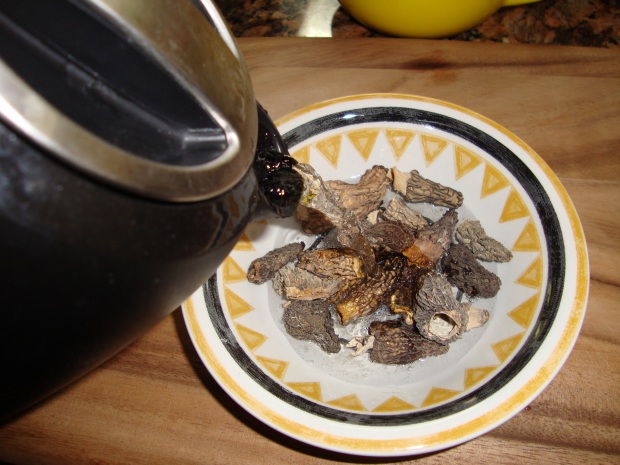 2.    In the meantime, slice ½ a red onion into thin slices and keep these aside.
3.    The remaining amount of onions should be diced into small pieces. 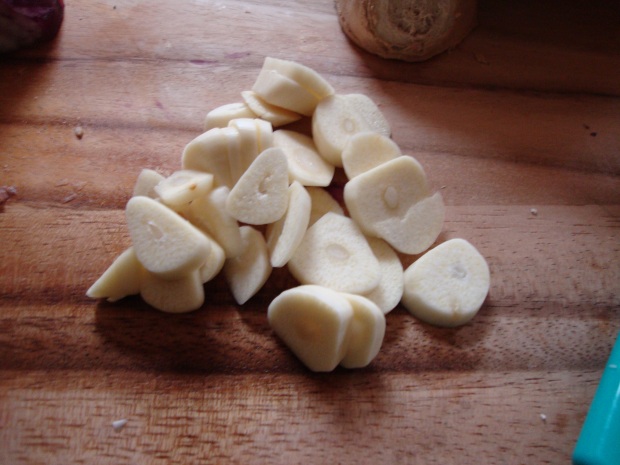 4.    Peel and slice the garlic cloves and also the ginger root and set them aside.
5.    Wash and chop the cauliflower into bite sized pieces and also wash and dice the tomatoes.
6.    Then pour 2-3 tablespoons of oil in a medium sized frying pan and heat it on high heat. 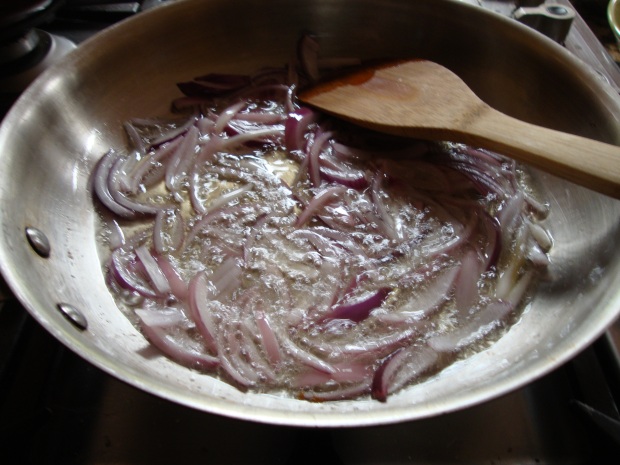 7.    When the oil is hot, pour the sliced onion pieces into it and fry the onions till they are golden brown and crispy – do not burn the onions or they will taste bitter. They should be medium to dark brown. 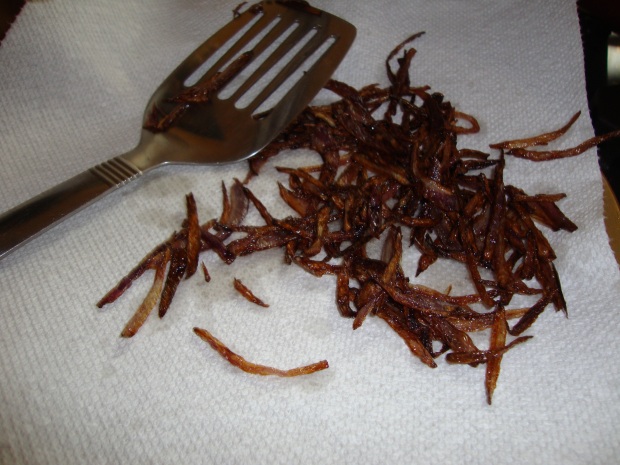 8.    Take the onions out of the oil and place them on a dry paper towel to remove any excess oil from them and set them aside for use later. 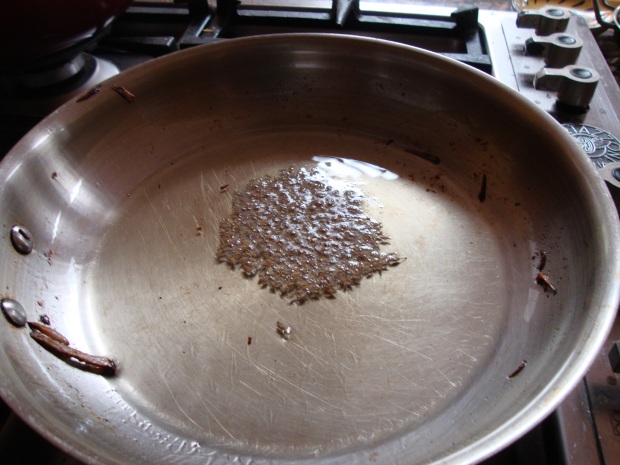 9.    In the pan with the hot oil, pour the teaspoon of cumin seeds and let them sputter (takes 20-25 seconds) and then add the chopped onions (that you had set aside earlier) to the pan and stir. 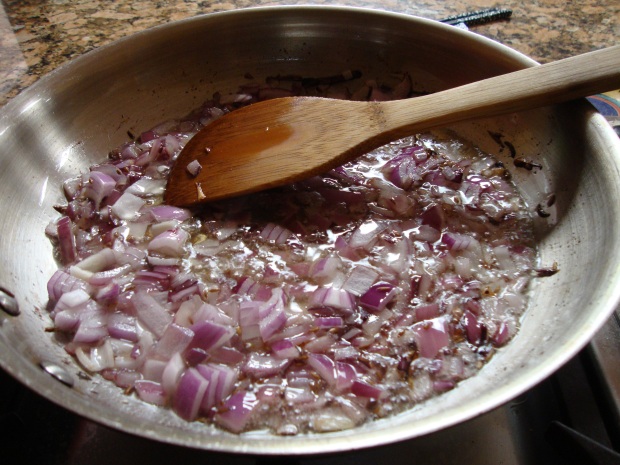 10.    Cook the onions over low heat till they become translucent and then add the garlic to them and stir. 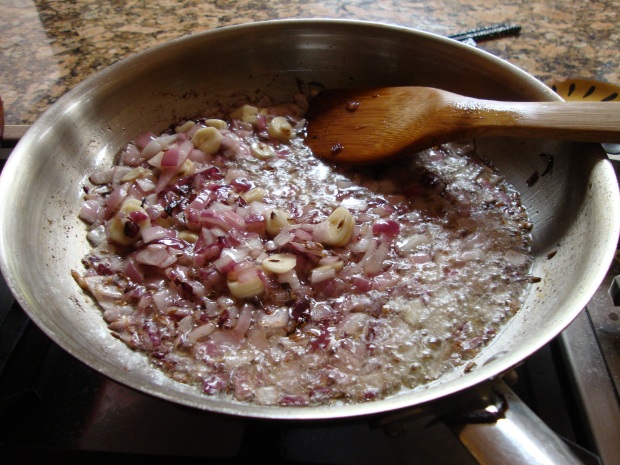 11.    Cook the onions and garlic together on medium heat (while stirring regularly) for about 4-5 minutes and then add the dry spices to the mix – star anise, cardamom pods, a stick of cinnamon and 4-5 cloves.
12.    Also add the turmeric powder and the red chili powder and the whole chili and stir. 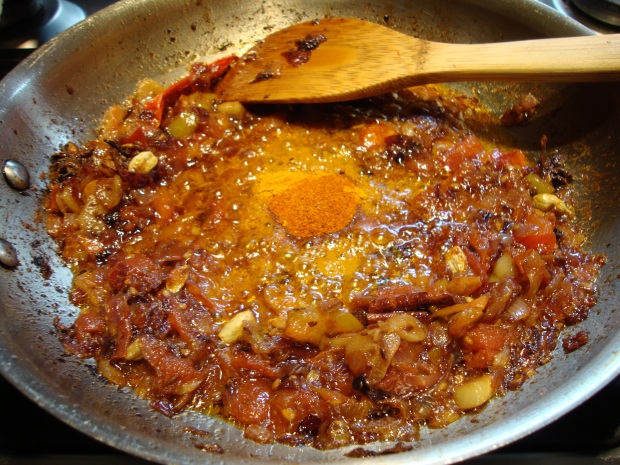 13.    Then add the chopped tomatoes and continue cooking and stirring. 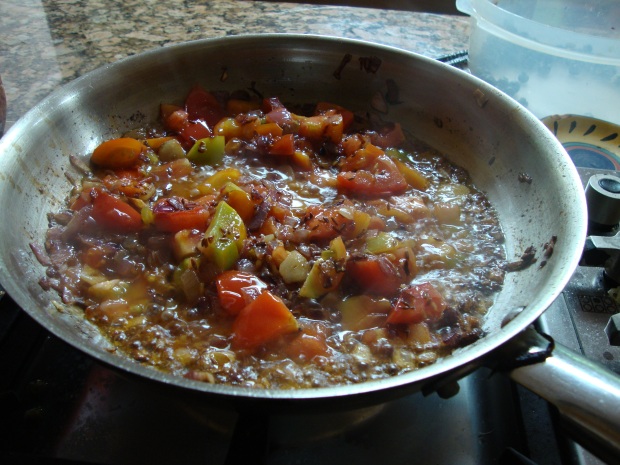 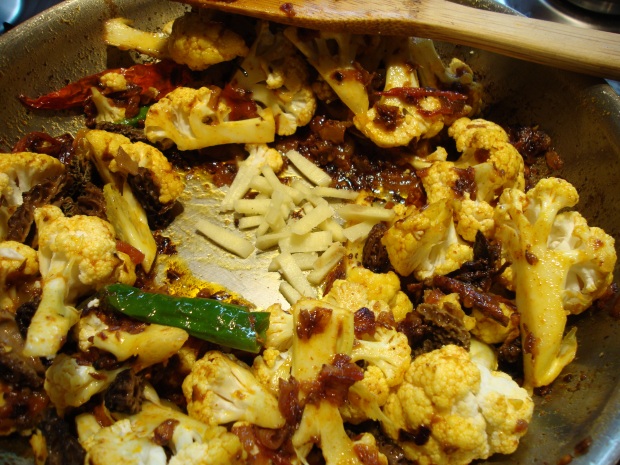 14.    When the contents of the pan look like they have fused together (you can’t tell the onion pieces apart from the tomato pieces), add the cauliflower florets and the ginger pieces and stir. Add salt (to taste) and stir and then cover the pan with a lid and let it cook on low heat.
15.    While the cauliflower is cooking, take the morels out of the soaking water and chop them into smaller pieces and dry them out. Do not throw away the soaking water because it has a lot of flavor and we will need to use it for the rice pilaf later.
16.    Pour in half the chopped morels to the pan with the cauliflower and continue cooking on low heat. Cover the pan so that the cauliflower can cook in its own juices. Stir frequently so that the food does not stick to the bottom of the pan.
17.    In the meantime grind the coriander seeds in a dry spice grinder.
18.    After 10-15 minutes of cooking, check for tenderness. If the cauliflower looks done, add the freshly ground coriander seeds and stir.  The cauliflower is now done and you can garnish it with a little bit of the fried crunchy onions we had kept aside. Serve it with a side of basmati rice pilaf.
Directions to cook the Rice Pilaf 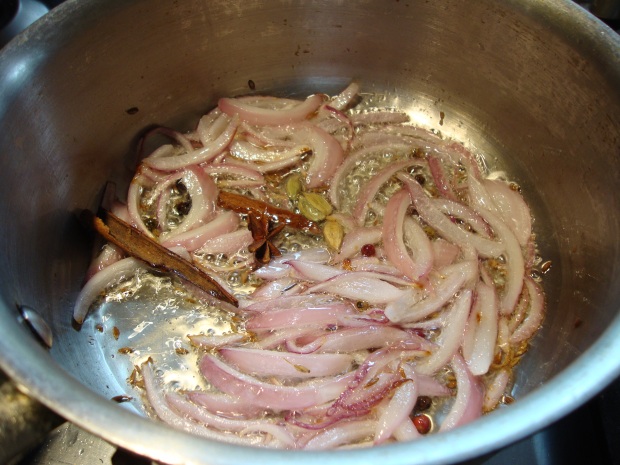 6.    Add the dry whole spices – cardamom pods, multicolored peppercorns, one cinnamon stick and one star anise to the pot and stir again. Let the spices cook in the oil for 20-30 seconds.
7.    Drain the water from the rice and pour the wet rice into the pot and stir vigorously so that all the rice grains become coated with the oil and the rice looks slightly cooked (take 2-3 minutes on medium heat).
8.    Add the cup of mushroom water that we had set aside earlier to the pot containing the rice and stir. Also add another cup of water to the rice and let the liquid in the pot come up to a boil. 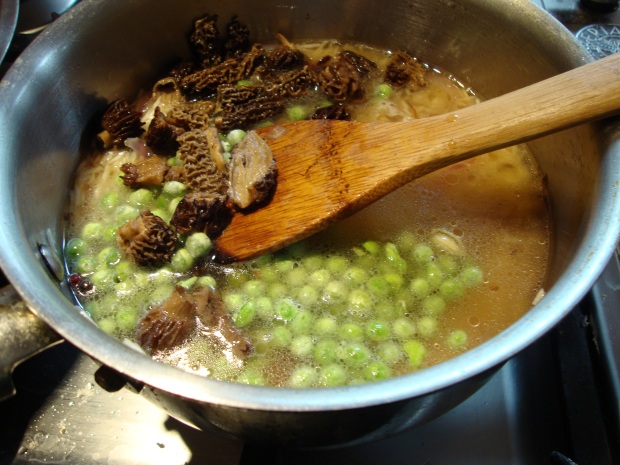 9.    Add salt (to taste) to the pot and stir, also add the remaining amount of soaked morels to the pot (we had used ½ for the cauliflower and the remaining half goes into the rice pilaf) and the frozen green peas and stir. Lower the heat to low and cover the pot. 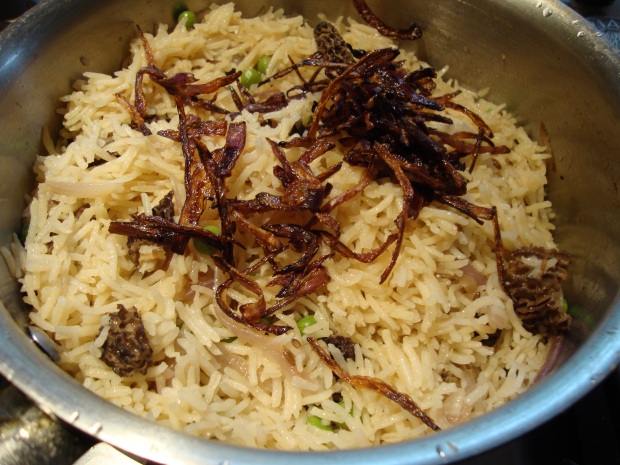 10.    The rice should be done in about 8-10 minutes of cooking on low heat – check the rice for done-ness.  Fluff the rice up with a fork and then mi in the remaining amount of crunchy fried onions that we had set aside.  Serve the rice while it is still hot with the cauliflower dish. 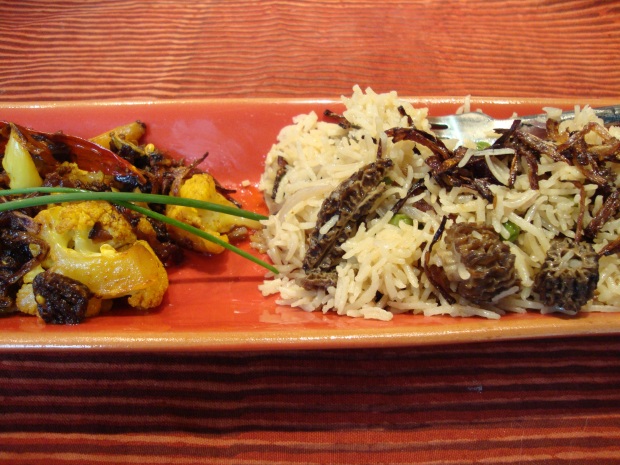