Almost ten years ago, while on a holiday to London, my kids and I found ourselves awake in the middle of the night with cravings for food.  My husband was still asleep and so in hushed tones, my two kids (who at that time were 10 and 8 years old) and I perused the 24-hours room service menu at the Park Lane Hotel and decided that we were going to order Roghan Josh with Naan.  I called the room service number close to 3:00AM and the phone was answered on the other end by a sleepy sounding grumpy Chinese man with a heavy accent.  I whispered my order of Roghan Josh and Naan about three times but somehow the poor man could not understand what I was asking for – I have an Indian accent that is laced with a bit of an American accent, he had a Chinese accent laced with a bit of a British accent and the result was utter confusion.  Despite several attempts he just could not understand what I wanted and my kids were thoroughly amused by the fact that at 3:00 in the morning I was trying to order a heavy Indian curry dish from the phone in the bathroom of a hotel! The kids had picked up the connecting phone in the bedroom and were listening in on my conversation. Their giggling fits didn’t help the matters much either and by the end of it, I too was laughing uncontrollably. Finally, the man on the other end had an epiphany and said “Oh I see Madam you want an order of Logan Rosh! I’ll see that it gets sent to your room in less than half an hour.” Ever since that day, our family has called this classic dish Logan Rosh.
I have not found Roghan Josh to be that popular in Indian restaurants in the US but somehow in England it is always on the top of the menu in most Indian restaurants and is even regular fare at some English pubs.  How this heavy curry recipe became so popular even in small countryside English pubs is beyond my comprehension but this factoid never fails to amuse me.  I guess cross-culture-ism makes for strange bed-fellows! While the British colonized India, we Indians were smitten with cucumber sandwiches for tea and baked beans on toast for breakfast and now the reverse colonization of England by the Indians and Pakistanis has brought Roghan Josh and Vindaloo to English pub food.
Traditional Kashmiri recipes of Roghan Josh require a base of mustard oil but I am not a big fan of mustard oil (it has a pungent smell that I don’t like to use in meaty dishes) and so I use corn oil instead. Also sometimes I alter the recipe up a bit by using goat meat instead of lamb because lamb has a more gamey smell and I find the dish very fatty to begin with and therefore combining it with the fatty lamb meat makes it a bit too much for my personal taste, but you could experiment and see what you like best. The most crucial thing is that the meat should be cooked slowly over a long period of time to get the meat completely tender and fall off the bone soft.  There is no rushing the cooking process with this dish and clearly the softness of the meat is best achieved through the slow cooking process and even though some people have tried to shorten the cooking process by using a pressure cooker, the taste clearly gets compromised that way. You could make the process easier on yourself by using a slow cooking electric crockpot. 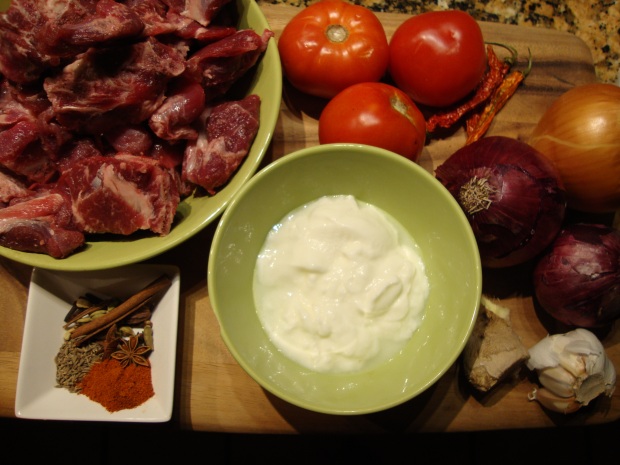 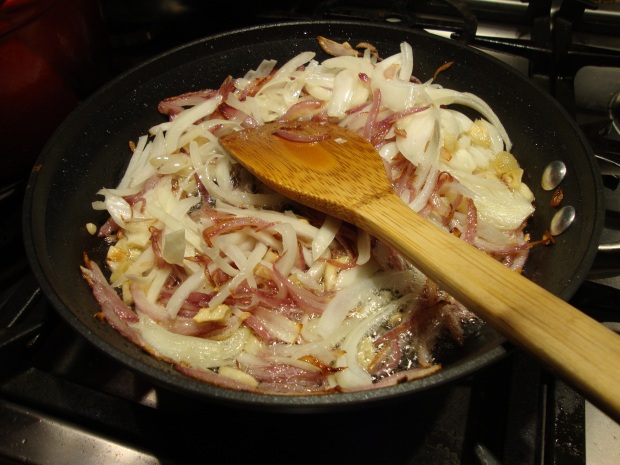 2.    In a small pan heat the cooking oil and put the sliced onions in it and cook over medium heat.
3.    While the onions are getting caramelized, peel and chop the garlic cloves, ginger and tomatoes (small dice).
4.    When the onions are translucent, add the chopped garlic into it and continue cooking on low heat. 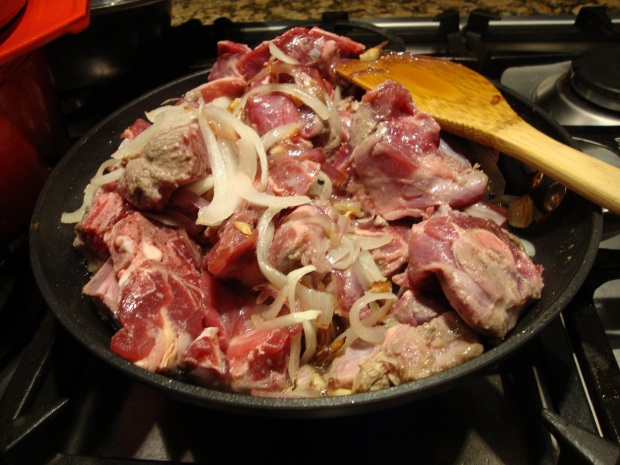 5.    After 5-7 minutes, add the meat to the pan and continue cooking on low heat till the meat pieces get browned on all the sides (takes 7-10 minutes).
6.    Then add the following spices to the pan – cumin seeds, star anise, cloves, both kinds of cardamom, whole red chilies, Kashmiri chili powder and the cinnamon stick and stir thoroughly. 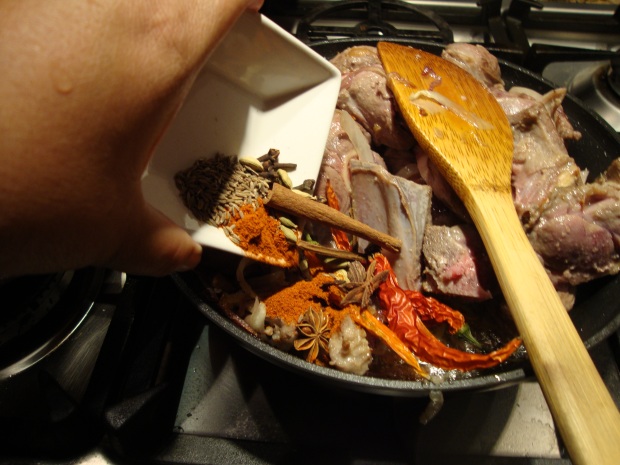 7.    While the pan is still on low heat and the meat is cooking in it, plug in the crockpot.
8.    Place all the contents of the pan (meat and onions and spices) to the crockpot and add the chopped tomatoes, yogurt, salt, garam masala, ginger pieces and one cup of water to the crockpot and cover and let the meat cook for 6 hours on medium or low heat. 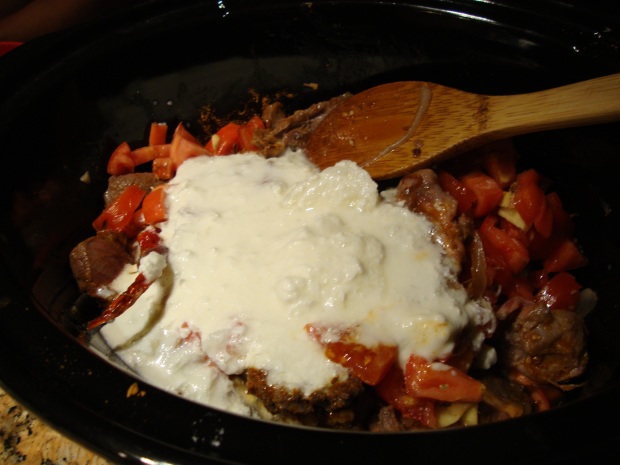 9.    After the crockpot’s timer goes off, check the softness of the meat (it should be fall off the bone soft).  If the meat is soft and still has too much water content to it, you can take the sauce part out of the crock pot and put it on simmer in a separate pot and let the water evaporate. 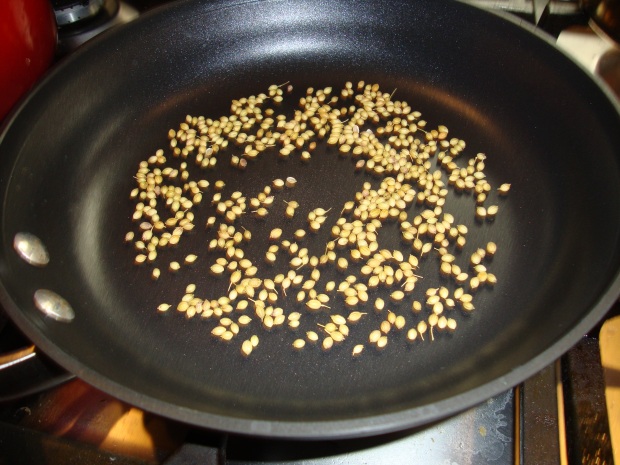 10.    While the sauce is thickening, roast the coriander seeds in a nonstick pan for 1-2 minutes and then grind them in a spice grinder.
11.    When the sauce is thick gets an even consistency, add the meat back to the pan and continue cooking on low heat. Also add the nutmeg (break it in 2-3 pieces), the mace strands, sugar and ground coriander powder to the pot and continue cooking for another 5-7 minutes.
12.    Serve the Roghan Josh with chopped fresh cilantro on top and a side of either rice pilaf or warm flat bread (roti or naan). 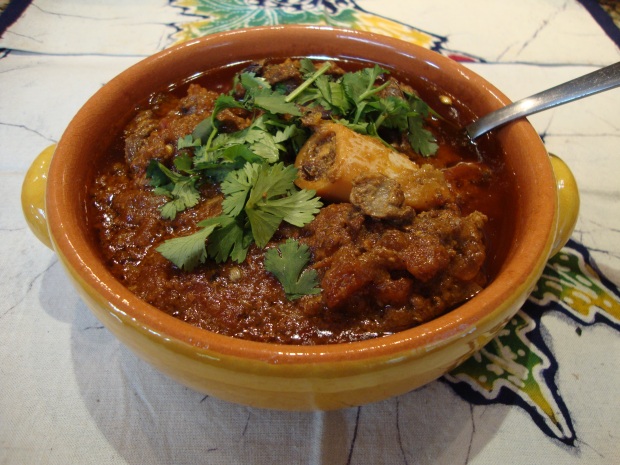