This is probably one of the most complicated recipes that I use (takes 2-3 hours to work through it) but if you follow the steps carefully, I assure you that the Biryani will come out as good as that in any restaurant.  Biryani is not difficult to make, it’s just that there are a few too many steps to follow and they have to be followed at exactly the right point so that the result comes out well – the meat has to be cooked well enough that it is fall-off-the-bone-soft but not so soft that it actually falls off the bone before it is served; and the rice has to be cooked three quarters of the way through before the meat is added to it.  Also the proportions of the spices to the rice to the meat have to be right so that we don’t have too much meat and very little rice or too much rice and not enough meat for everyone.   This is why I have taken so many pictures for this recipe and each one shows the exact point at which the next step has to be followed.  And yes, I don’t make this complicated recipe often – it is an occasional treat that I make usually when we have company over for dinner. 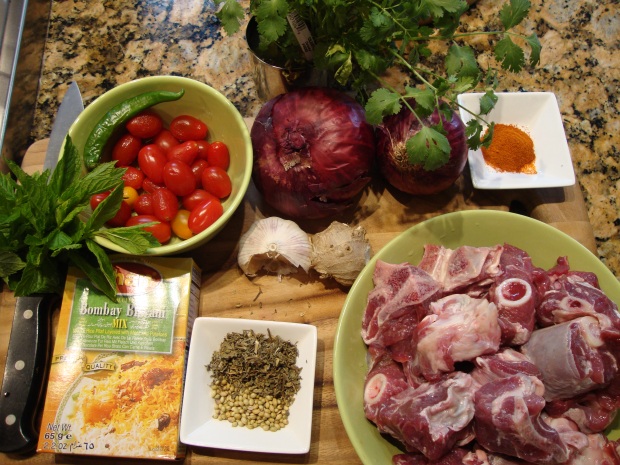 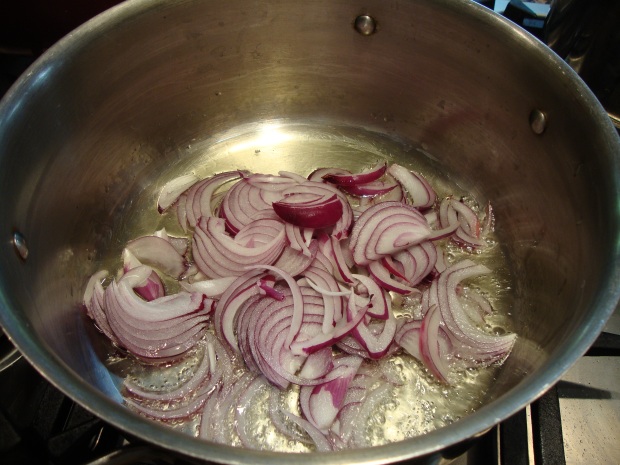 1.    Thinly slice half a large red onion.
2.    In a large heavy bottomed pan, pour the cooking oil and start heating it on medium heat.
3.    Fry the thinly sliced onions in the oil till they are golden brown and crispy. Stir them constantly so that they don’t burn. 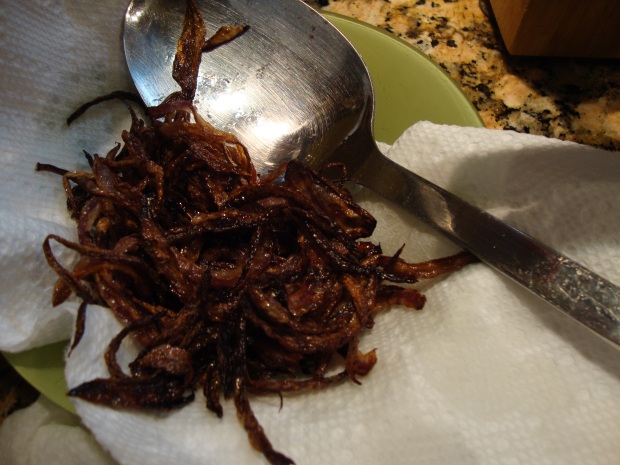 4.    Take the fried onion pieces out of the hot oil keep them on a dry paper towel to let the oil drain out of them. 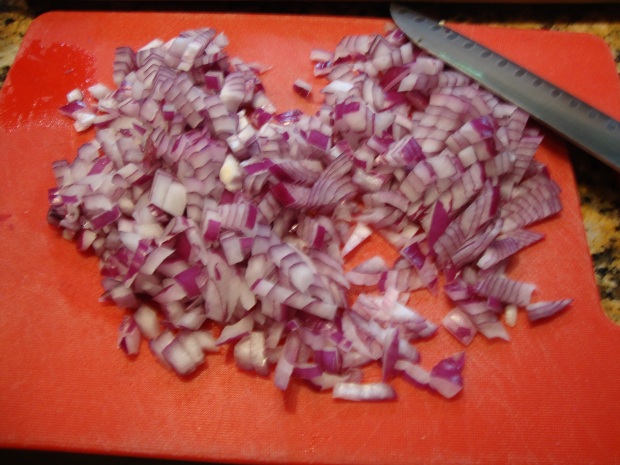 5.    Peel and dice the remaining onions in small pieces and start cooking them in the hot oil. 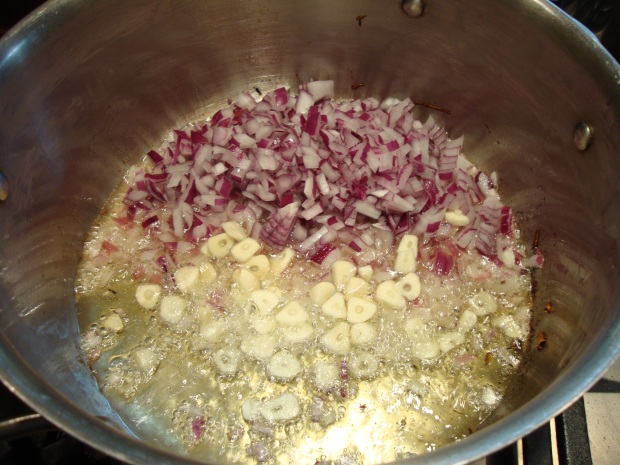 6.    Also peel and slice the garlic cloves and pour them into the pot and on low heat cook the onions and garlic till they are translucent. 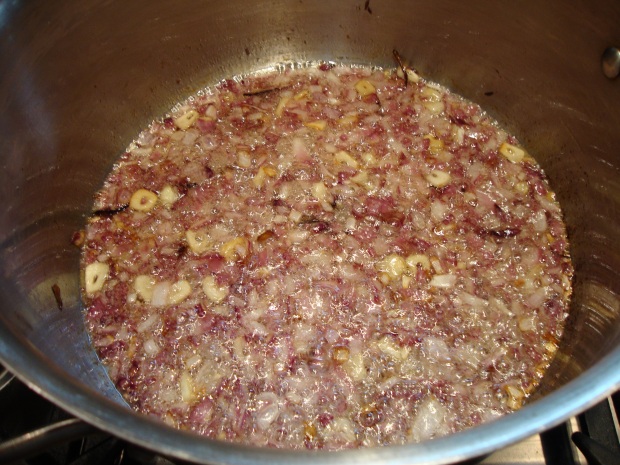 7.    While the onions are cooking, grind the tomatoes in a blender to make a puree.
8.    When the onions are lightly browned, add the cumin seeds, the bay leaf, the star anise, nutmeg, cardamom pods and the cloves into it and cook for another 2-3 minutes. 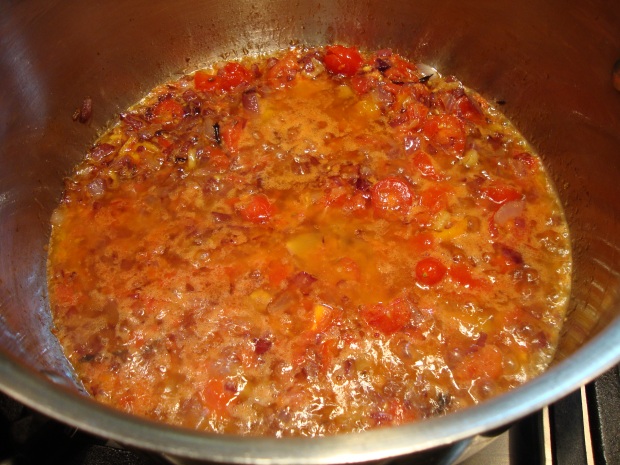 9.    Add the tomato puree and the green chili to the pot and cook on medium heat for another 5-7 minutes, stirring constantly. 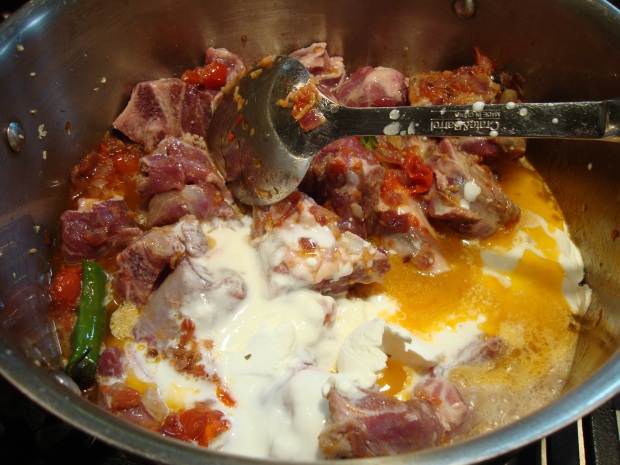 10.    Then add the Shaan Biryani masala, the meat, and yogurt and mix all the contents thoroughly and cover the pot with a lid and let the meat cook for 20-25 minutes.  Check on the meat every 5 minutes or so. If it looks like there is too little water left in the pot, add a few tablespoons of water at a time.  It is important not to add too much water but some water is needed to soften and cook the meat. 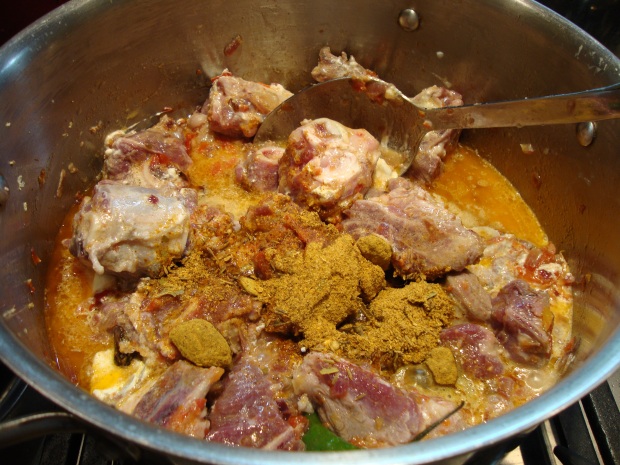 11.     When the meat looks almost cooked, grate the ginger root and add it to the pot and stir thoroughly. 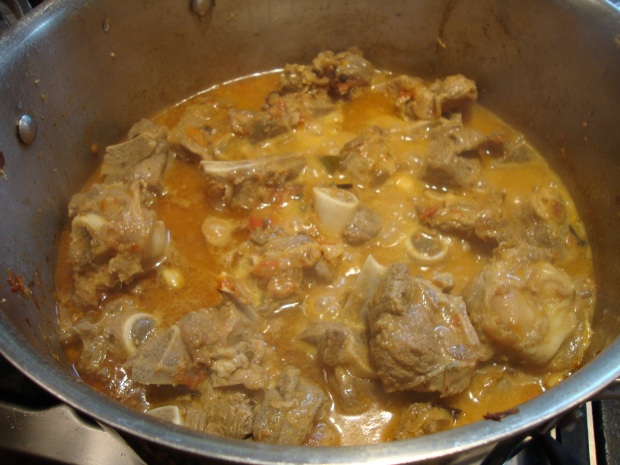 12.    Also add the ground coriander seeds and the Kasoori  methi and cook for another 5-7 minutes or till the meat is cook thoroughly and is soft enough to be eaten. 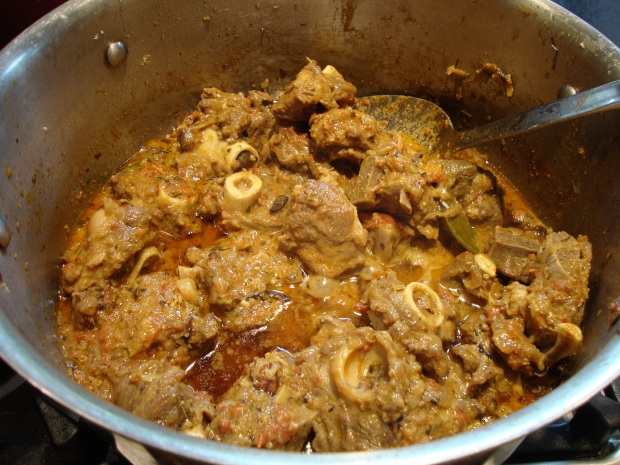 13.    In another large pot start heating 6-8 cups of water.
14.    Wash the basmati rice under a stream of cool water and when the water in the pot starts to boil, add the washed rice to it and cook for about 7-10 minutes (till the rice is almost cooked, but not cooked all the way through – we need the rice to be al dente so that later when it is mixed with the cooked meat, it cooks a little bit more and absorbs the flavors of the curry and spices). 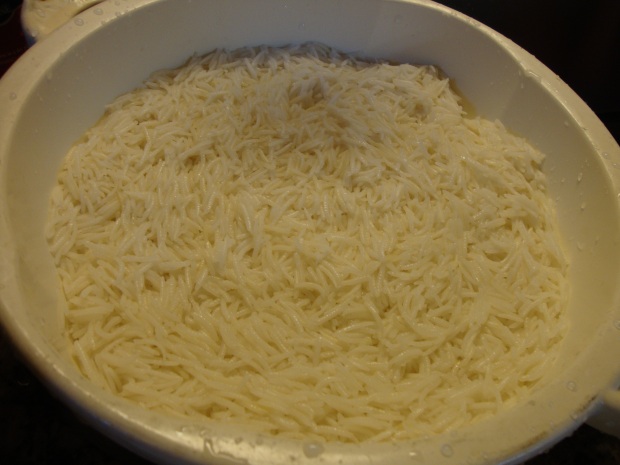 15.    When the rice is almost cooked, drain the hot water out of the pot and place the rice in a colander where you can wash the semi-cooked rice under a stream of cold water to stop the cooking process.
16.    Let the water drain out of the rice for 4-5 minutes (so that the biryani rice does not stick to each other later). When the water from the rice is drained, it is ready to be layered with the meat for the biryani. 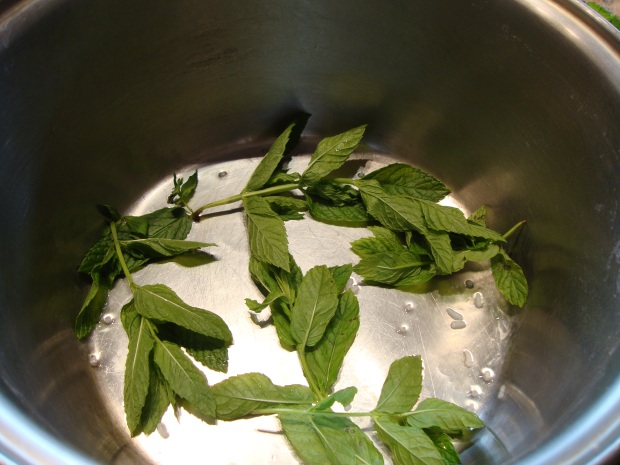 17.    In a large heavy bottomed pan, place the mint springs at the bottom and then a layer of semi-cooked rice (about 1-2 inches deep), then pour a layer of the meat and the heavy curry in it, then a few of the fried onions that we had set aside.  Keep repeating the process of layering till all the rice and meat are finished. 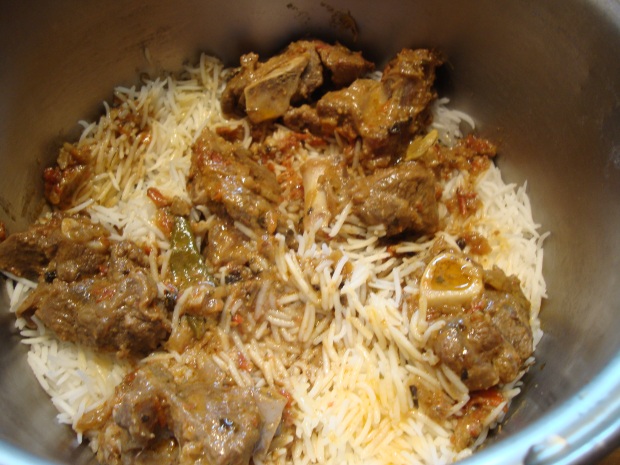 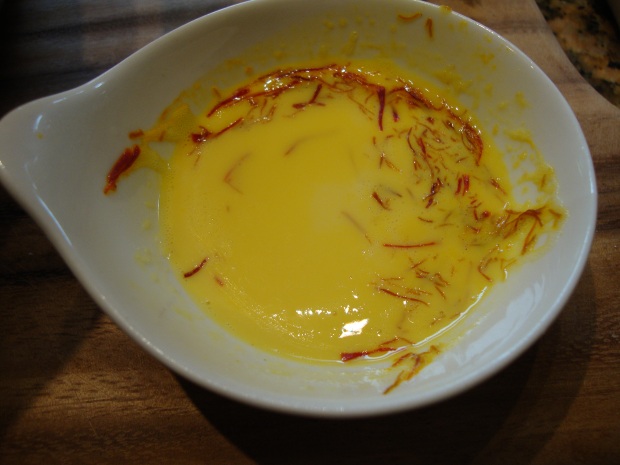 19.    Sprinkle the saffron milk on to the rice and gently mix it with the rice on top. 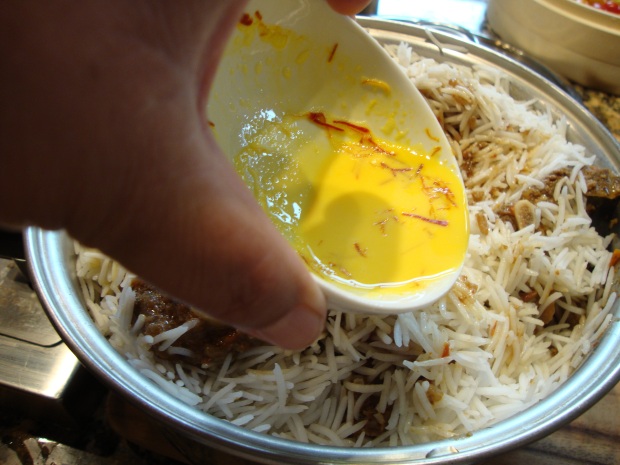 20.    Cover the pot with a lid and place this pot on top of a heavy iron griddle and cook the rice on low heat for another 20-25 minutes. If you don’t have a griddle, place the pot in another larger pot and pour water into the lower pot so that when this water gets heated, it evenly distributes the heat in the pot containing the biryani.  Pour enough water in the lower pot so that the smaller pot sits in about 4-5 inches of water. 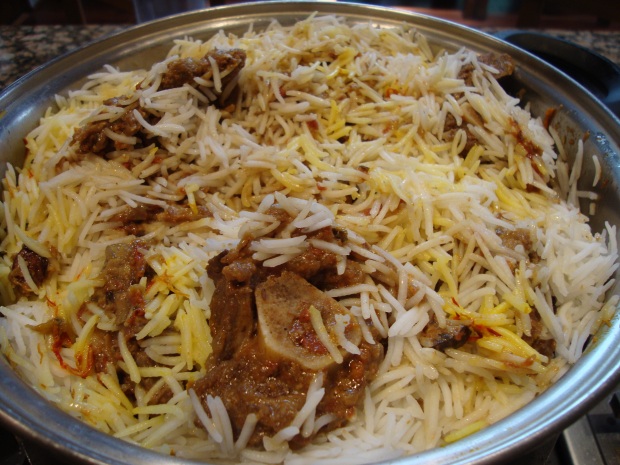 21.    To serve the biryani, gently mix the rice and the meat.  Do not mix it thoroughly because the mark of a good biryani is that the rice should not be sticking to each other and that there should be rice of varying colors in it (some white, some browned from the curry of the cooked meat and some yellow from the saffron). Serve the rice topped with a few more pieces of fried onions and a side of mint raita/yogurt  and some chopped cucumber, raw onions and tomatoes as salad. 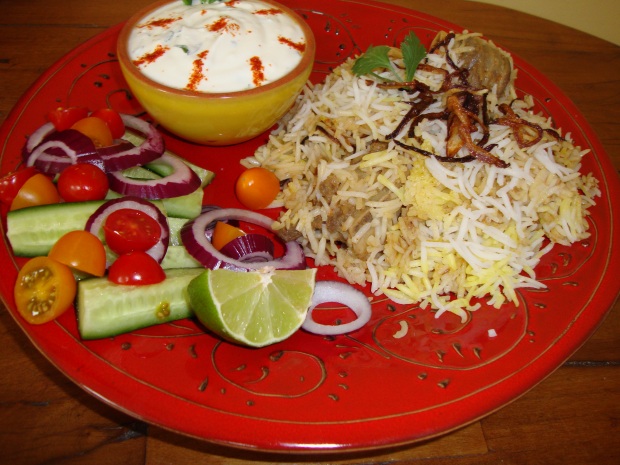